Sterling and Canadian Weaken in Quiet Markets, Dollar Mixed ahead of Key Events 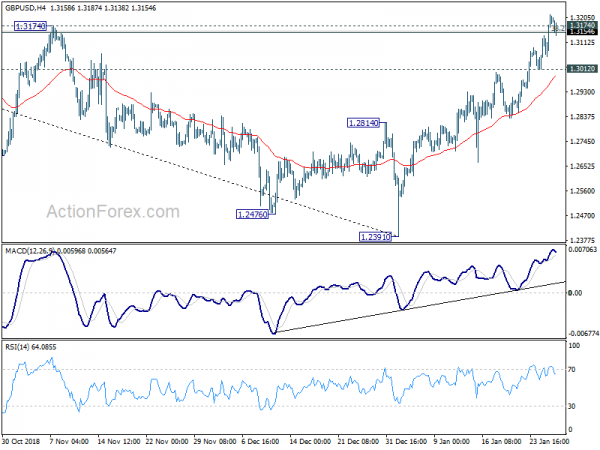 Trading in the forex markets has been rather subdued for most of the day. But there are signs of some additional weakness in Sterling and Canadian Dollar in early US session. Traders could be lightening up positions ahead tomorrow’s Brexit votes and debates in the Commons. But the Pound could make a come back if amendments related to ruling out no-deal Brexit are being approved. Meanwhile, Canadian Dollar follows oil prices lower.

On the other hand, Dollar is mixed as the government agencies affected by the historic shut down reopen. There are enough high profile events for Dollar traders to pay attention to, including US-China trade meetings, FOMC rate decisions and non-farm payrolls reports. All these three events could trigger violence move in the greenback in either directions. But for now, Euro, Swiss Franc and Yen are the strongest ones for today.

Technically, AUD/USD and USD/CAD are moving away from 0.7235 and 1.3180 levels respectively, suggesting recent consolidations are extending. EUR/GBP’s recovery from 0.8617 is gather some momentum. Break of 0.8725 resistance will strong suggests that 0.8620 key support is depended and would bring stronger rebound in the cross. In that case, GBP/USD could be dragged down through 1.3012 minor support to indicate rejection by 1.3174 key resistance.

US NABE: Majority of businesses expect no recession in the next 12 months

The National Association of Business Economics in the US released its quarterly business condition survey today. Nearly all respondents do not expect a recession in the US in the next 12 months. However, 64% expected growth to expect 2%, sharply lower than 90% in prior survey in October.

Regarding capital spending, 84% said the 2017 Tax Cuts and Job Act has not changed their investment of hiring plans. NABE President Kevin Swift said “the capex story is really a tale of two cities. Fewer firms increased capital spending compared to the October survey responses, but the cutback appeared to be concentrated more in structures than in information and communication technology investments.”

77% indicated no impact from trade conflicts on their investment hiring and even pricing plans. However, from the goods-producing panelists, 36% said their raising prices and 27% delaying investments.

UK Parliament’s Brexit Committee said today that the government cannot have a “managed no-deal” Brexit as its policy. The committee’s chairman Hilary Benn said “having taken a wide range of evidence on the implications of a no deal Brexit, the committee is clear that this cannot be allowed to happen.”

He added “MPs must be able to vote on extending Article 50 if Parliament cannot reach agreement on a way forward before March 29.”

May said to privately rule out no-deal Brexit

The Sun reported that UK Prime Minister has privately told the Cabinet that she will rule out no-deal Brexit. That came under influence of Remainer ministers and the under the worry that hard Brexit would cost UK lost of jobs. But for now, she won’t do it publicly, as it could remove a key bargaining chip with EU.

Bob Sanguinetti, chief executive of the UK Chamber of Shipping, warned that “In the absence of a viable alternative to the Withdrawal Agreement, we continue to be heading for a no-deal scenario which is damaging, disruptive and chaotic to business, to manufacturers and consumers”. And he urged to “put aside party politics and in the moment of need that we find ourselves in, we need to look at the bigger picture and look at what is best for the country”.

Separately, Brexiteer Boris Johnson wrote in Telegraph on Sunday, saying May is seeking legally binding change to the Irish backstop fro the EU. However, Ireland has already make it clear they won’t accept any change to the current backstop agreement.

BoJ minutes: Momentum towards 2% inflation target was being maintained

In the minutes of December 19/20 BoJ monetary policy meeting