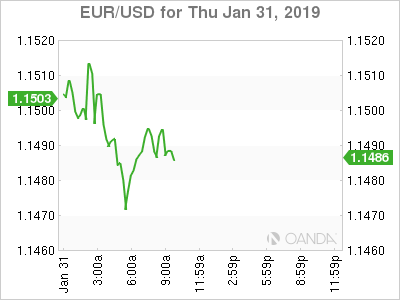 Global equities seesawed overnight as momentum from the dovish Fed meeting faded, another round earnings focused on global growth concerns, and expectations are low to see a significant progress with trade talks today.   President Trump will  meet with Vice Premier Liu He, the most important meeting since the December 1st meeting with President Xi, which saw the announcement of the 90-day trade truce.  Risk appetite’s next move will likely be dictated by corporate earnings today and whether we see confirmation that talks will continue between China and US.

The Fed’s dovish message was loud and clear to dollar traders.  The Fed removed the reference for further gradual rate increases and placed the word patient in their policy statement.  The greenback could see further weakness as key technical levels are teetering on another breakout.  The dovishness is likely to remain firmly in place until we start to see cross currents ease.  Rate hike expectations for the remainder of the year have completely disappeared, with the market pricing in a greater chance of a cut as the next move.

Chinese Vice Premier Liu He, the top economic advisor for President Xi will meet with President Trump this afternoon, with low expectations of seeing any major progress expected on key issues regarding intellectual property theft, forced technology transfers, and market access.  Early this morning, President Trump tweeted “No final deal will be made until my friend President Xi, and I, meet in the near future to discuss and agree on some of the long standing and more difficult points.”

The EU resumes the game of chicken with UK, as they offer no signs of giving any concessions over the next few weeks.  PM May is still planning on going to Brussels to make her case, but the EU appears set on not offering her anything until after the UK has another vote on February 14th.  The EU is tentatively saying that they will meet with at the next scheduled summit which is on March 21-22, only a week before Brexit day.  While the risk of a no-deal hard Brexit has gone up, cable appears unfazed for now.

While many emerging market currencies have rallied in January, the rupee is the worst performer in Asia as fiscal concerns will be tested when Indian Prime Minister Narendra Modi announces his budget.  This is a make or break moment for Modi ahead of the national vote in May.  With inflation already near 18-month lows, pressure may grow for the RBI to lower rates.

It seems all the headlines of late our positive for crude prices.  Oil is stronger after the Fed’s dovish pivot crushed the dollar, helping commodity prices, OPEC + production cuts are kicking in, sanctions against Venezuelan’s state-owned oil company PDVSA were announced, and Saudi Arabia has cut exports to the US, dropping them to the lowest since October 2017.  The recent rally for West Texas Intermediate crude continues to respect the $55 level, and if we don’t see that breached soon, we could see a big round of profit taking.

Today will be the busiest day of this earnings season.  GE delivered mixed results that were accompanied with news they reached a settlement of $1.5 billion with the Department of Justice on their old subprime mortgage business.  Looking at the tech sector, shares of Facebook soared on better than expected earnings, while Microsoft shares dropped as concerns grow for the cloud business.  Intel also fell after a 6-month search process for a new CEO, ended with them naming interim CEO Bob Swan as the permanent solution.

Gold’s momentum got another boost yesterday from the Fed’s dovish pivot on rates.  The precious metal is poised for its fourth consecutive monthly gain as the fundamentals remain strong for it to climb higher.  Gold has rallied in January on nervousness that trade talks between the US and China may not yield significant progress before March 1st deadline, slower global growth concerns, and expectations that the Fed’s next move will be a cut.  While the recent rally is ripe for some profit taking, the yellow metal might not find significant resistance until the $1,370 area.