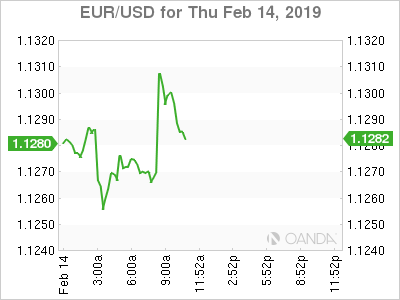 The greenback and US stocks quickly reversed gains after US retail sales for the month of December posted the biggest drop since 2009.  The biggest market reaction on the softer data was the move in Treasuries, with the 10-year yield Treasury falling 5.7 basis points to 2.646%.  While the December sales data was delayed due to the government shutdown, the concern is that it could reflect that US might be closer to the end of the current economic cycle.  Markets may remain very cautious until we see the January data.

Kicking the can down the road appears to key theme for major political events in the financial markets.  Last night, President Trump suggested he would be open to moving back the deadline for higher tariffs on Chinese imports by 60 days.  After resorting to a stop-gap funding bill to end a record long government shutdown, US lawmakers are planning to vote today on a spending bill that will avoid another government shutdown.  President Trump is not happy with the bill, but he has suggested he would approve the plan and possibly use emergency powers to secure additional funding for his border security.  On the Brexit front, Parliament will vote on amendments, but a key vote on the Cooper-Boles amendment, which would delay Breixt and would take a no-deal off the table, will not be voted on until the February 27th vote.


President Trump appears set on alleviating market fears that we will see an escalation in the trade war and a 60-day extension will allow for more negotiations to tackle key differences on intellectual property theft, forced technology transfer and further opening up their markets to US companies.  Conflicting reports this morning circulated that the both sides were close to a deal, while the Wall Street Journal noted talks remain deadlocked and that China is attempting to persuade the US by committing to large purchases of semiconductors and other goods.  Markets appear convinced we will not see an escalation in tariffs and that trade talks will continue for some time.

Germany escaped a recession and their flat quarterly GDP reading did not derail eurozone’s growth of 0.2%.  The market reaction to German GDP was limited, the euro rose slightly as expectations seem to be very poor for German economic releases.  The data confirmed the narrative we saw from leading indicators that Germany is weak.  The worst could be over for Germany, as poor weather conditions, weakness in the auto sector, and weakness from trade war effect on global growth may not remain in the following quarters.

The euro remains stubbornly stuck in a tight range and momentum may not accelerate until we see price breakaway from 1.12 or 1.1550.

European markets climbed higher as Industrials and Technology stocks outperformed.  Industrials got a boost from Airbus SE earnings results that showed a beats on both EBIT and revenue, also benefitting from the news they will abandon their unprofitable A380 jet and lock in $1.2 billion in charges, paving the way for a fresh beginning for incoming CEO Faury in April.  Shares of Rolls Royce and Safran also surged on the news of the scrapping of the A380 superjumbo.

Gold prices were dangerously close to collapsing below the $1,300 before the huge retail sales miss, helped the yellow metal recover most of its earlier losses.  The precious metal could remain stable as markets will remain uncertain if the US economic cycle is over.

Crude prices remained capped despite OPEC’s reduction of 800,000 barrels a day in January, more cuts pledged from Saudi Arabia and record low exports sent to the US from Venezuela and Saudi Arabia.  Weakening data from the US could put a dent in the demand argument for higher prices and we may see traders pare bullish bets.

South African President Cyril Ramaphosa is under pressure to save power utility Eskom SOC Holdings Ltd.  After multiple days of rolling blackouts, the financial crisis for the state-owned electricity company is reaching a climax as the company appears poised to run out of money by April.  South Africa’s largest labor group has been protesting the Eskom job losses and the timing of this crisis is terrible for Ramaphosa as he seeks reelection in May.  The Eskom impact to the economy along with uncertainty in the general elections in May and the risk of losing investment grade status could continue to weigh on the rand.