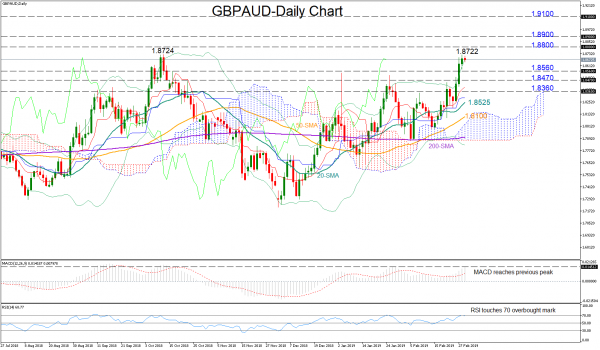 GBPAUD recorded three strong bullish days this week to fully recover towards the 1.8724 top. A crucial battle is currently taking place around this area, as any decisive step higher would reactivate the 2 ½ -year old upward pattern, turning the pair bullish in the bigger picture.

Under a technical view, though, chances for another winning cycle seem to be decreasing as the RSI is turning lower after touching the 70 overbought mark, a warning that the rally is overstretched. The MACD keeps improving above its red signal line, but it is still in question whether it can surpass its previous high. Note that the pair is also trading along the upper Bollinger band. Yet, as long as the RSI and the MACD hold in bullish zone, any downfalls could prove short-lived.

In case the recent bullish action proves overdone, the price could drift downwards to meet the previous support area of 1.8560, while further down, the way would open towards the 1.8470-1.8360 zone, which the market found hard to clear in the past. Another leg lower could retest the 20-day moving average (MA) currently at 1.8250, though the 50-day MA at 1.8100 could be a bigger challenge.

If positive momentum strengthens, a significant rise above the 1.8724 top could target the 1.8800 psychological mark, while even higher the price could take a break within the 1.8900-1.9000 area.