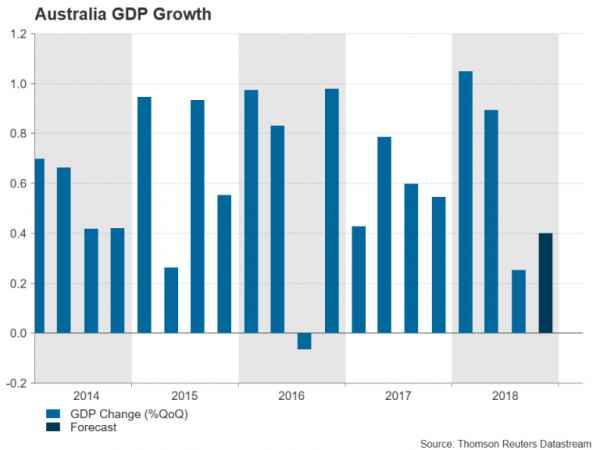 Central banks will move to the fore next week as the European Central Bank, the Reserve Bank of Australia and the Bank of Canada will be holding policy meetings. With all three central banks recently lowering their outlooks for their respective economies, markets will be on standby for possible shifts in policy stance. The US February jobs report will be another highlight for investors. Other key releases will be Q4 GDP numbers from Australia, Canadian employment figures, and UK and US services PMIs.

Australian GDP and RBA meeting could drag on aussie

It’s going to be a crucial week for the Australian dollar with a data-heavy economic calendar and an RBA policy meeting likely to test some key technical levels for the aussie/dollar pair. First up on the agenda are January building approvals and fourth quarter business inventories on Monday.  There will be more Q4 barometers on Tuesday with the release of net exports contribution. The real highlight though will be the Q4 GDP estimates on Thursday. Australia’s economy is forecast to have expanded by 0.4% quarter-on-quarter in the final three months of 2018 to produce an annual rate of 2.6%. January retail sales and trade numbers will wrap up the week on Friday.


The RBA, which will announce its latest policy decision on Tuesday, is expected to keep rates on hold but may backtrack on its overoptimistic 2019 growth predictions of around 3% if the GDP data comes in line or below expectations. A dovish RBA and disappointing growth figures could weigh heavily on the aussie.

Chinese trade issues to stay under the spotlight

With plenty of domestic concerns to inundate aussie traders next week, China-related risks will also be playing their part in driving the Australian currency.

As US and Chinese negotiators try to resolve their remaining differences in their long-running trade conflict, monthly export numbers from China will be looked at to assess the impact of the dispute on the economy. The country’s exports are forecast to have fallen by 4.5 year-on-year in February, while imports are expected to have slid by 1.4% y/y. Other data worth watching will be consumer and producer inflation figures on Saturday.

Another event markets will be keeping an eye on is the National People’s Congress, which starts on March 5. Reports suggest the Chinese government wants parliament to vote on a new law on foreign investments. The proposed legislation will likely address US demands for better protection of foreign businesses operating in China and their intellectual property. Such a move could potentially pave the way for US and Chinese trade negotiators to close a deal very soon, helping to extend the risk rally in place since the start of the year.

Revised Japanese GDP estimates out on Friday will likely confirm that the economy returned to growth in the final quarter of 2018, with a small upward revision being expected following the strong business spending figure released this week. But this week’s data also revealed very weak industrial output in January, and so the focus has now shifted to the first quarter. Thus, household spending numbers due on Friday will be watched for further clues about the strength of the Japanese economy at the start of 2019.

The yen is unlikely to see much reaction to the data, though it could face some downside pressure if they point to unexpected weakness.

It’s going to be an important week for the euro as the European Central Bank could announce fresh support measures for the Eurozone economy. There will also be a good deal of data to draw investors’ attention. Starting the week on Monday is the Eurozone sentix index along with January producer prices for the region. On Tuesday, the final February services PMI from IHS Markit and retail sales for January are out. Revised GDP estimates for the fourth quarter are due on Thursday but no change is being forecast to the prior reading of 0.2% q/q.

Hence, the big attraction on Thursday will be the ECB policy decision. The central bank is widely anticipated to maintain interest rates and its forward guidance unchanged. However, there is increasing speculation that policymakers will signal, if not announce, a new round of cheap loans (TLTRO) for Eurozone banks to boost lending in the bloc. Updated staff macro-economic projections will be available for the Governing Council to sift through at the March meeting so if there is a significant downgrade of growth and inflation projections, it is almost certain to prompt Council members into action.

It is difficult to predict the market’s response to any ECB decision on TLTRO as, on the one hand, a lending stimulus could ease fears of a further slowdown, lifting the euro.  While on the other, it would signal a more dovish central bank, especially if there are also hints that the planned rate hike for late 2019 could be pushed back, and this would be negative for the single currency.

Light UK calendar could be spoiled by Brexit again

The Markit/CIPS construction and services PMIs will be the main releases to come out of the UK next week. However, there’s a chance British Prime Minister Theresa May could bring the meaningful vote on her Brexit deal to Parliament early before the March 12 deadline if she manages to secure the legal assurances she is seeking from the EU that the Irish backstop would be temporary if triggered.

There seems to be growing movement within MPs, particularly among Eurosceptics, to back the deal if May obtains the legal guarantee after she offered lawmakers a vote on ruling out a no-deal scenario and extending Article 50. Labour’s backing of a second referendum also rattled hardline Brexiteers who may now fear Brexit could be postponed or even aborted.

The pound’s strong rally over the past week will either unravel or be fuelled depending on which way the vote goes if it’s held in the next seven days. Otherwise, the only focal point for traders will be the services PMI on Tuesday. The index is forecast to have slipped into contraction territory to 49.9 in February, which would reinforce the stagnant growth picture at the start of 2019.

Rising oil prices may have been supporting the Canadian dollar since the start of the year, but a more dovish Bank of Canada has kept the loonie’s gains in check. Investors will be hoping to get a clearer picture about the Bank’s future rate plans amid mixed signals about the Canadian economy in recent weeks. The BoC will announce its latest policy decision on Wednesday and is expected to hold rates at 1.75%.

Canadian economic indicators will also be monitored, with December trade figures and the February Ivey PMI scheduled for Wednesday, as well as the February employment numbers on Friday.

US jobs growth to slow but wages to inch up

Although the Fed has made it clear it has no plans to act on interest rates in the first half of this year, markets are undecided whether there will be a rate hike or a cut towards the end of 2019/early 2020. Traders are therefore still actively adjusting their positions in the US dollar in response to incoming US data.

The main interest next week will fall on the ISM non-manufacturing PMI for February and December new home sales on Tuesday, the December trade balance on Wednesday and the nonfarm payrolls report for February on Friday, which, as usual, is expected to attract the most attention.

The US economy is thought to have created 185k jobs in February, slowing from the impressive 304k positions added in January. The unemployment rate is forecast to dip from 4.0% to 3.9%, while wage growth is expected to have quickened slightly from 3.2% to 3.3% y/y.

A stronger-than-expected figure could boost the dollar, as well as Treasury yields, as it would make it more likely that the Fed would resume its rate hikes later this year.