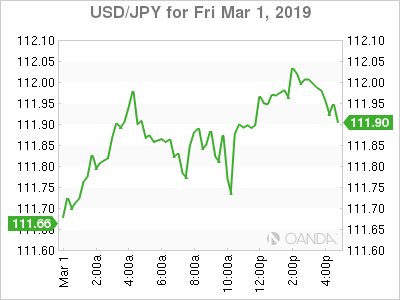 Mixed economic data, a rollercoaster ride in trade, and fresh geopolitical risks saw US equities edge higher on the week, while the dollar was little changed.  With the data dependent Fed likely to be on hold for at least the first half of the year, financial markets will closely focus on China’s policy summit for clues on their goals for the year. Many will focus on the economic growth target, but what could be just as important, if not more, are any announcement on stimulus, plans for reform and opening up their markets. The trade war also remains a hot button as expectations grow for a Trump – Xi meeting to occur in the middle of the month.  Special counsel Robert Mueller is also nearing completion of his report on whether the Trump campaign colluded with Russia.  Once the report is submitted to Attorney General Bill Barr, it could be days or weeks before we find out his ruling.

A busy week filled with interest rate decisions might see key rates unchanged, but investors will closely watch to see if growth forecasts are slashed by the ECB, will the RBA’s fears of global risks and housing weakness grow and will the Bank of Canada become slightly less hawkish and more worried about slowing growth. The US February nonfarm payrolls number will be released on Friday and the employment situation is expected to return closer to trend with 185,000 jobs created, many would not be surprised if the January reading of 304,000 is revised down.


The US dollar continues to struggle to breakout as mixed data confirms the data-dependant Fed’s stance on being patient. The US economy delivered better than expected growth in the fourth quarter, but fresher data suggests housing remains weak, personal income is soft, inflation is muted, while consumer confidence is rebounding. The greenback’s gains have been strongest to the yen and Canadian dollar.

The month of February saw Treasuries trade in the narrowest range since 1979 (2.62% to 2.74%). The yield on the benchmark 10-year Treasury yield did however steadily climb higher this week from 2.66% to 2.75%. Falling expectations that the Fed’s next move will be a rate cut helped push yields higher. The markets will closely await the updated Fed’s projections on March 20th. The Fed downgraded their forecast to 2 hikes for 2019 at the December meeting. Recent economic data suggests the Fed could downgrade their rate hike forecast down to one hike.

The Reserve Bank of Australia (RBA) is unanimously expected to keep policy steady at 1.50% .  How concerned the RBA is with the housing sector could unveil clues as to whether they are going to start to have a more accommodative stance.

The Bank of Canada (BOC) is also expected to keep rates unchanged at 1.75% and they will they likely ease up on their hawkish outlook following softer inflation and the recent deterioration in GDP and retail sales.

The ECB will keep policy steady unchanged as inflation continues to struggle.  They will downgrade their inflation forecasts and expectations for a rate hike could fall to 2020.

Geopolitical events and a wrath of testimonies dominated headlines this week. Stocks heavily reacted to the tensions from India and Pakistan, a failed Trump-Kim summit, and testimony from US Trade Representative Lighthizer that suggested a lot of work still needs to be done before we see an agreement on trade with China.

Earnings season is approaching the end and we will see several key reports from consumer discretionary stocks. Key results will be released from Target, Salesforce.com, Kohls, Dollar Tree, Costco and Kroger. The performance in US stocks for the first two months of the year delivered the best performance seen in almost three decades.

West Texas Intermediate crude appears to be at an inflection point as the OPEC + production cuts appear to have run their course while US production is expected to increase in the coming months. Softer economic data from the largest economy in the world also put a damper on demand, but that may not matter much in the short-term if China signals major policy changes that will help stabilize growth. The supply-side will likely keep any rallies in oil capped, but any disappointment with the demand side could keep the prices under pressure.

The precious metal lost its luster after fading expectations for the Fed’s next move to be a rate cut saw the psychological $1,300 level penetrated. Technical traders are focusing on the key break of the bullish trend line that started back in October and the close below the 50-day SMA.