RBA Rate Decision and Q4 GDP Growth ahead for the Aussie 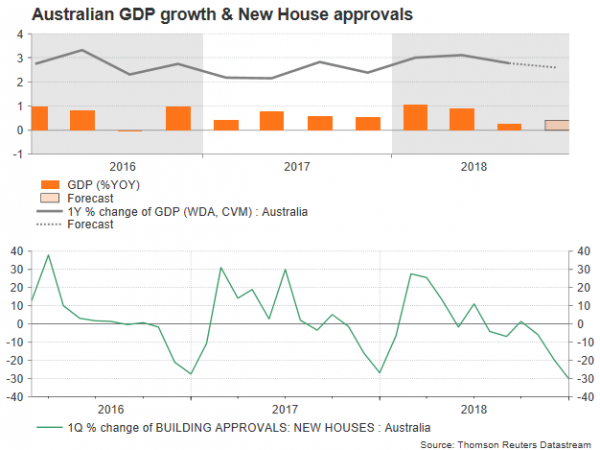 The Reserve Bank of Australia is scheduled to set monetary policy on Tuesday at 0030 GMT but economic uncertainty at home, and in the global economy more generally, are currently giving little flexibility to policymakers to adjust interest rates, potentially leading to another uneventful meeting. The next day, Australian GDP growth figures for the final quarter of 2018 will likely endorse the decision as analysts forecast further economic moderation.

After slowing for two consecutive quarters, Australian GDP growth is said to have inched up by 0.1 percentage points to 0.4% quarter-on-quarter in the last three months of the year to December. In yearly terms though, expansion is expected to have flipped back to 2.6% from 2.8% in Q3 and down from the strong 3.4% increase registered in Q2, ending the year almost where growth was at its beginning.

While last week’s Q4 private new capital expenditure data advanced more rapidly than analysts projected, brushing some worries over the business sector aside, new data on Monday indicated that firms’ profits and wages rose modestly in the three months to December, a sign that companies are struggling to make money. Consumption remained a concern and therefore a potential headwind for growth as well, as home prices nationally continued to fall in February. The numbers also revealed that the downturn in the housing sector was more widespread, raising questions about whether the discounting would bottom out anytime soon.

With the cooling property market hitting household wealth at a time when debt-to-disposable income is still uncomfortably high (190%), the RBA will certainly avoid hiking rates above the current level of 1.5% on Tuesday. The central bank’s governor Philip Lowe is also planning to stretch its record spell of steady rates throughout the year but at some point next year, he is optimistic that borrowing costs will go up if the unemployment rate drops further and inflation moves higher in line with the Bank’s projections, saying that the property downturn is unlikely to “derail the economy”.

Lowe’s recent upbeat tone, however, did little to convince markets that the next move in rates will be up, as the overnight indexed swaps keep displaying an 84% probability of a 25 bps rate cut by November 2019. It is reasonable to say that policymakers have still a lot to consider before taking the decision to tighten monetary policy. If wage growth doesn’t kick into higher gear, consumption and hence inflation, might take longer to pick up, delaying any rate rise that would make household debt unsustainable.

Economic developments outside the country should be watched carefully as well.  Despite the latest headlines reporting that the US and China are close to agreeing on a deal that would end the tariff war, the story has taken many surprising turns lately and hence more needs to be done from both sides to  convince markets that the trade war might be finally approaching an end. More specifically, new laws on foreign investment during China’s annual National People’s Congress in the next two weeks might signal that an agreement is close at  hand if parliamentary members decide to limit technology transfer and increase intellectual property protection as the White House desires. Yet, Beijing will weigh the cons and pros of such a decision as more protection for outsiders could lead to less favorable conditions for domestic businesses. Note that in any case, all Australia wants is its major export partner, China, to keep growing in a healthy way.

In the FX space, Monday’s encouraging trade headlines did not help the risk-sensitive Australian dollar much as investors turned their focus on weak business data, which lowered GDP growth prospects a little. Should the RBA shift its tone to the downside in the rate statement from the neutral currently expected – potentially heightening worries over the housing slowdown – AUDUSD could slip towards the 0.7070-0.7060 support area. In case GDP growth figures disappoint too, a stronger sell-off could emerge between 0.70 and 0.69.

In the alternative scenario, if the RBA messages that a rate hike is more likely than a rate cut in the next year and/or GDP readings beat expectations, the pair could jump into the 0.7120-0.7160 zone. Higher, a break above the 0.7200 level could prove even more significant to the market.

It is also worth noting that the RBA governor will be speaking at the Australian Financial Review’s 2019 Business Summit on Tuesday at 2210 GMT.