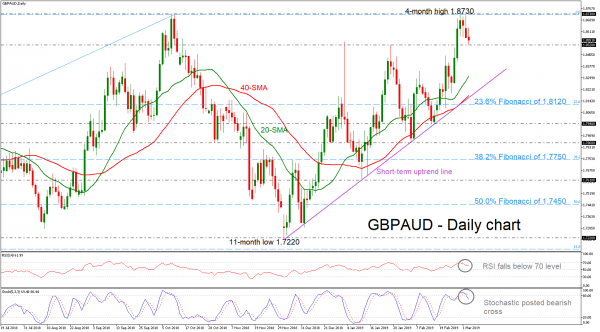 GBPAUD is set to complete the third straight negative day following the pullback on the 1.8730 resistance level. A crucial battle is currently taking place around the 1.8520 support, as any decisive step lower could activate a bearish correction mode.

From the technical view, though, chances for a negative retracement seem to be increasing as the RSI is turning lower after it topped near the 70 level, a warning that the rally is overstretched. Also, the %K line of the stochastic oscillator recorded a bearish crossover in the positive zone and is moving lower in the daily timeframe.

In case the bearish action continues and slip below 1.8520, this could see prices testing the 20-simple moving average (SMA), which currently stands near 1.8310. Another leg lower could drive the pair until the uptrend line and the 40-SMA near 1.8180.

If positive momentum strengthens and returns higher again, the next level to have in mind is the previous high of 1.8730. More sharp advances could take prices until the strong psychological level of 1.9000, identified by the bottom on May 2016.

In the short and long-term timeframes, GBPAUD seems to be bullish with the moving averages all pointing upwards.