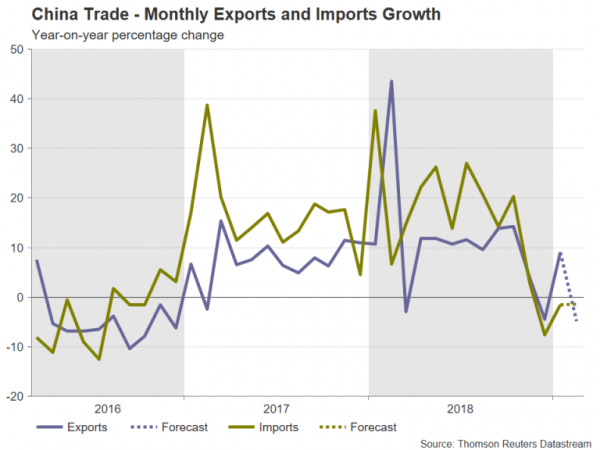 China will publish monthly trade numbers on Friday with exports seen to have fallen back in February after January’s unexpected surge. But with the country’s negotiators closing in on a trade deal with the United States and the government announcing further fiscal measures to stimulate growth in the economy, the trade figures may not generate much reaction even if it surprises to the downside.

In January, exports jumped by 9.1% year-on-year as they were boosted from companies front-loading their shipments ahead of the Lunar New Year holiday at the start of February. With no such distortion in February, exports are expected to have resumed the recent downtrend by falling 4.8% y/y. Imports, meanwhile, are forecast to have declined for the third straight month, dropping by 1.4% y/y.  As for the trade surplus, it’s expected to have shrunk from US$39.16 billion to US$26.38 in February.

The data may struggle to see a big response in currency markets given the calming of fears about a steeper slowdown in the world’s second largest economy following progress in US-China trade talks and further measures being unveiled by authorities to support growth. China’s currency, the yuan, has climbed to more than 7-month highs against the US dollar as worries about a deepening trade conflict recede. Its more liquid proxy, the Australian dollar, hasn’t enjoyed a similar rally as the currency has been held back by rising expectation of an RBA rate cut later this year.

On the flipside, the 50% Fibonacci could be an important support at 0.7019, while further losses would risk breaching the 61.8% Fibonacci at 0.6954, which if broken, would shift the neutral bias to a bearish one.

With all the indications that an announcement of a trade agreement between the US and China is only weeks away, if not days, investors are turning less pessimistic about the outlook and this is reflected in the equities rally. Hopes that China’s slowing economy is nearing a turning point were further bolstered from developments at the National People’s Congress – the annual gathering of parliament – taking place this week. Reports suggest the government is planning to cut VAT rates for businesses and raise infrastructure spending, as well as take add