As a Trade Deal Moves Closer, is China at Risk of Overstimulating its Economy? 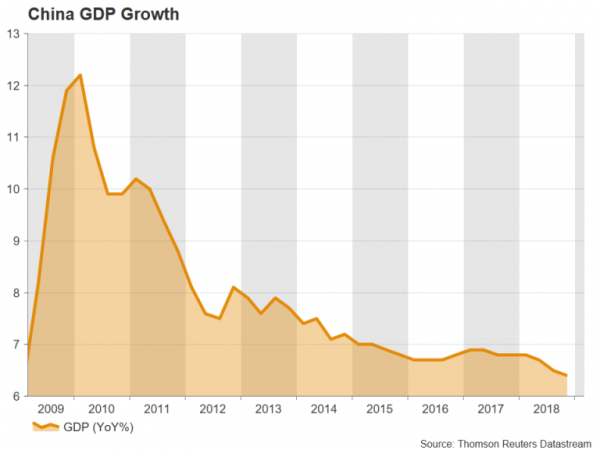 Growth in China decelerated to the slowest pace since 1990 last year, underlining the challenges the country faces amid sluggish global demand and a more protectionist United States. China’s leaders haven’t been sitting on their hands, however, as an abundance of policy measures have been initiated since last summer when the first wave of US tariffs struck. But with the fiscal and monetary loosening being stepped up amid a continuing downtrend in growth, is the government risking undoing the progress it’s made on deleveraging the economy?

As the government grapples an ongoing slowdown, at least one battle could be about to end as negotiations in the Sino-US trade dispute reportedly move to the “final stages”. It’s worth being reminded, however, that China’s economy started losing steam long before US President Trump triggered the trade war and growth in 2018 was already under pressure from deleveraging and other structural reforms.

Those reforms, whilst they have been inflicting short-term pain, were considered to be crucial in streamlining inefficient state-owned enterprises and making China’s huge debt burden sustainable in the long run. But with the state desperate to kick-start a flagging economy, it now risks fuelling borrowing by companies and local governments and possibly worsening the debt bubble that has been steadily building over the years.

There is no doubt that the US levies on Chinese imports, totalling $250 billion, have hurt China’s exporters. But perhaps the biggest impact of Trump’s trade war has been the uncertainty it has generated for businesses, both in China and globally, rather than the actual tariffs themselves. Trump’s tough stance on the issue has taken China by surprise and does not reflect too well on President Xi Jingping’s leadership. That probably makes the need for an economic rebound all the more urgent. Hence, is why the government is expected to approve a raft of stimulus measures at this week’s annual gathering of political leaders and delegates – the National People’s Congress.

The biggest boost to the economy could come from tax cuts, totalling 2 trillion yuan, with the most significant being the reduction in value added tax (VAT) for manufacturing firms, as well as for the transportation and construction sectors. Spending will also increase, with more infrastructure projects being planned, and together with lower tax receipts, they are expected to push up the budget deficit for 2019 to 2.8% of GDP from 2.6% in 2018.

More worrying though is the increase in the ceiling of the amount of debt local governments are allowed to issue. Private borrowing is also being encouraged with the government setting a target for commercial banks to increase lending to small businesses by 30%. This means more cuts in the reserve requirement ratio (RRR) are likely, with the People’s Bank of China (PBOC) having cut it five times already since the beginning of 2018.

The cuts in RRR are not the only method monetary policy has been slowly loosened. The central bank has been regularly carrying out reverse repo operations to inject liquidity into the banking system. The PBOC has been relying on reverse repos to boost liquidity rather than cutting interest rates, signalling that it will only move to lower its benchmark one-year policy lending rate as a last resort.

While it’s too early to see the accumulated impact of all these measures, they seem to have been enough to change investor sentiment towards the country’s undervalued stocks. Chinese stocks have been rallying strongly since January on the back of rising optimism of a resolution to the US-China trade conflict. The stock market got an additional lift from this week’s stimulus news, sending the leading share indices, the CSI 300 Index and the SSE Composite Index to 9-month highs. Year-to-date, their gains stand at an incredible 27.8% and 24.3% respectively.

The Chinese yuan has also been rallying, appreciating by about 2.5% against the US dollar so far during 2019. It hit a 7-month high of 6.6718 to the dollar in February. But analysts are not predicting further appreciation for the currency with a median forecast of 6.70 for the year-end.

The yuan’s direction in the coming months will probably depend a lot on what happens on the trade front. The talks appeared to have gained consider