Canada to Show No Employment Growth in December 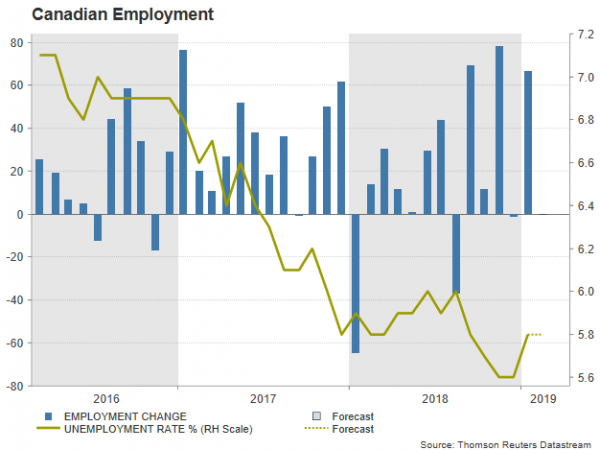 Weighed by political jitters and disappointing GDP growth prints earlier this month, the Canadian dollar turns its sights to employment figures for direction. The results, however, published on Friday at 1230 GMT may extend economic uncertainty instead.

After January’s impressive 66.8k rebound, analysts believe that the Canadian economy added no jobs in February, leaving the unemployment rate unchanged at 5.8% and slightly above the 44-year low of 5.6% first reached in December.

These data follow a row of discouraging stats that turned investors more careful when buying the loonie. First it was inflation that surprisingly decelerated more than expected in January after a strong rebound towards the Bank of Canada’s ideal 2.0% price target in the previous month. Then it was GDP growth readings that hurt sentiment as projections for a softer pullback to 1.2% in the fourth quarter appeared too optimistic when actual numbers arrived much lower at 0.4%. The monthly gauge for December was even more worrying as the evidence displayed a contraction of 0.1% for the second consecutive time.

The central bank – like its main counterparts abroad – relies on the labor market to achieve its inflation goal. Should the labor market tighten further, forcing companies to offer higher payments to attract the skills they desire, household spending and therefore price growth could pick up steam. Policymakers could then resume their rate hiking cycle if inflation moves above the midpoint of the BoC range target of 1-3%. But if February’s employment stagnancy is not a “one-off” situation, then policymakers may even think over a rate cut amid the slump in the energy sector and generally the broader fear over a global economic slowdown.

While the sudden downturn in crude prices has been restored to some degree, it is still uncertain whether the market could fully recover those losses under the ongoing US-Sino trade war that continues to keep businesses cautious with their investment plans. A failure to reach an agreement could see US tariffs on $200 billion Chinese imports doubling and potentially Chinese growth melting, taking the energy industry and thus Canadian economy down as well, as China is the second top buyer of Canadian products after the US. In such a case, Canadian firms could avoid any new hiring or any increase in paychecks, limiting inflation pressures and hence any plans for additional monetary tightening. Note that the trade deficit widened sharply to multi-year highs in December thanks to a 21.7% drop in exports of energy products that resulted on the back of falling crude prices.

In FX markets, the loonie lost considerable ground against the dollar this month, helping USDCAD to touch a three-month high of 1.3456 on Wednesday. A weaker-than-projected jobs report on Friday, could reduce chances for a rate hike this year and raise speculation for a rate cut, pushing funds out of the Canadian currency. In this case USDCAD could stretch higher to test the 1.35 and 1.36 psychological levels.

On the other hand, if employment shows positive growth or/and the unemployment rate shifts lower, the pair could return to the 1.3375-1.3340 support area, while steeper declines could also revisit the 1.3300-1.3260 congested zone.

Meanwhile on the political front, the Canadian Prime Minister Justin Trudeau is facing mounting criticism over his government’s handling of a fraud, with two ministers quitting the cabinet over the case. Developments around the issue could affect buying interest for the loonie if the scandal intensifies.