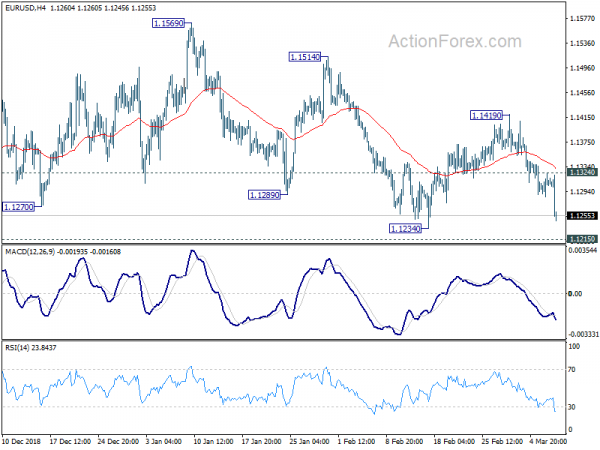 Euro tumbles broadly after ECB delivered and all-the-way dovish meeting. There will be no rate hike until at least 2020. New TLTRO-III is announced. ECB expects sizeable moderation in growth. GDP growth forecast was revised down substantially. Yet, risks surrounding outlook are still tilted to the downside. Selloff in Euro is dragging down other European majors, as well as German 10-year yield, which is back below 0.1 handle.

Staying in the currency markets, commodity currencies are surprisingly the strongest ones today, despite dovish outlook on RBA, RBNZ and even BoC. Pull back in global treasury yield could be a factor helping them. Even US 10-year yield is now back below 2.7 handle and is moving downward. Overall, Yen and Dollar are mixed.

Technically, EUR/USD is heading back to 1.1215 low and break will confirm resumption of larger down trend from 1.2555. USD/CHF will likely test 1.0098/0128 resistance zone too. GBP/USD is back pressing 1.3109 but it’s stubbornly holding on to this support so far.

In ECB’s post meeting press conference, President Mario Draghi said there are signs that “some of the idiosyncratic domestic factors dampening growth are starting to fade”. However, the weakening in data points to a “sizeable moderation in the pace of the economic expansion that will extend into the current year”. Underlying inflations “continues to be muted”. And weaker economic momentum is “slowing the adjustment of inflation” towards target.

Draghi added that Incoming have continued to be weak, in particular in manufacturing, “reflecting the slowdown in external demand compounded by some country and sector-specific factors”. And the impact is “turning out to be somewhat longer-lasting”. Thus, near-term growth outlook will be weaker than previously anticipated

Also released in European session, Swiss unemployment rate was unchanged at 2.4% in February. Foreign currency reserves dropped to CHF 739B in February.

BoE MPC member Silvanna Tenreyo said the “effect of that Brexit uncertainty on demand has become increasingly evident in recent months”. The effect is most apparent in business as “investment has been falling in the UK at a time when it has been growing in our international peers; business confidence surveys have slumped; hiring intentions have fallen back.”.

There were also signs of impact on h