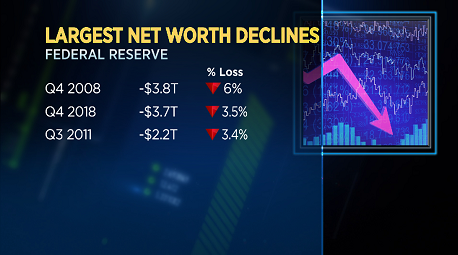 Americans’ net worth fell at the highest level since the financial crisis in the fourth quarter of 2018 as sliding stock market prices ate into the household balance sheet.

Net worth dropped to $104.3 trillion as the year came to an end, a decrease of $3.73 trillion from the third quarter, according to figures released Thursday by the Federal Reserve. The fall amounted to a drop of 3.4 percent.

Much of the slide came due to Wall Street’s woes, as the stock market suffered a precipitous decline that started in October and briefly reached bear market status. Equities skidded as investors began to fear that the Fed would keep raising interest rates even as economic conditions began to deteriorate.

By the time the market drop ended in late December, households saw $4.6 trillion worth of equity value deteriorate. The decline was offset somewhat by a $300 billion increase in real estate value. The overall move was the second-highest quarterly dollar drop since the Fed began tracking the statistic.

Overall, financial assets totaled just more than $85 trillion at the end of the year, while real estate value was $29.2 trillion.

Household net worth has been rising strongly since the crisis and is up 73 percent since 2009.

After suffering their worst Christmas Eve in history, stocks staged a turnaround and ultimately saw their best two-month start to a year since at least 1991. The Dow Jones Industrial Average is off about 1.6 percent in March though still up more than 9 percent year to date.

The fall in net worth came during a quarter when GDP rose 2.6 percent, according to a first estimate. That was part of a year that saw growth near 3 percent despite a lackluster period for financial markets. Economists largely expect 2019 to start with little growth in the economy, as the Atlanta Fed sees GDP up just 0.5 percent.