Week Ahead – Another Brexit Deadline Looms; Bank of Japan Meets 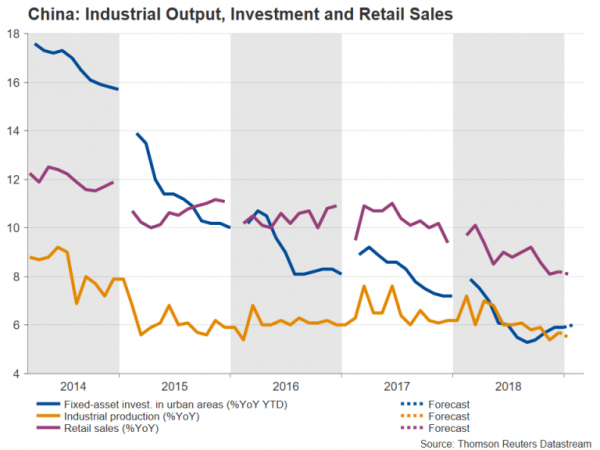 A vote in the British parliament could determine whether the Brexit deadline will be extended, while a Bank of Japan policy meeting will be another highlight for traders in the coming week. Economic indicators will also be watched closely amid renewed growth jitters as industrial output figures for January are reported in China, the Eurozone, the United Kingdom and the United States. Inflation numbers from the US will be the other main release.

Key Chinese indicators for January-February will come under more scrutiny than usual on Thursday given the absence of the January data due to the long Lunar New Year break. Industrial output in China is forecast to have slowed from 5.7% to 5.5% year-on-year in the first two months of the year, potentially signalling a further loss in momentum at the start of 2019. Retail sales are also anticipated to have moderated slightly from 8.2% to 8.1% y/y. But investment in urban areas is expected to edge up from 5.9% to 6.0% y/y.

A downside surprise in the numbers would add to concerns about the extent of the slowdown in the world’s second largest economy, especially after this week’s dismal export figures, though there is some support from the recently announced fiscal stimulus measures and optimism about a trade deal with the US. The Australian dollar, which is sensitive to China-related risks, could suffer further losses from more gloomy data. The aussie slipped to 2-month lows this week following a poor domestic GDP print.

No change expected from Bank of Japan

BoJ policymakers will be meeting over two days for their latest policy decision, with the announcement due on Friday. Investors are not anticipating any change in policy by the bank as their targeted inflation, which excludes fresh food prices, remains confined just below 1%. However, Governor Kuroda will probably stick with recent language in his press conference and repeat that the Bank would consider easing policy if the economic slowdown threatens the progress towards achieving its 2% inflation goal, even as the debate within the board on the possible side-effects of a prolonged period of easy policy rumbles on.

In terms of releases, corporate goods prices for February and machinery orders for January will be viewed on Wednesday. But as always, unless there are big surprises from the BoJ or the data, the yen will continue to be driven mostly by dollar moves and safe-haven flows.

Theresa May’s Brexit deal will be put to a meaningful vote for a second time on Tuesday, but with the European Union still not budging on the deeply unpopular Irish backstop clause, the chances of the bill passing are looking slim. If MPs reject the deal again, they will get the chance on Wednesday to decide whether they want to block leaving the EU without an agreement. If a no-deal is vetoed, Parliament will hold another vote on Thursday, this time on extending Article 50.

The pound has now retraced all of the gains made following May’s offer to MPs allowing them to vote on a no-deal scenario as it’s become increasingly apparent that even if Parliament does rule out that option, it will do little to end the uncertainty regarding the Brexit process. If lawmakers choose to delay Brexit, a modest rise is attainable for the pound, while a surprise backing of May’s deal could send the pound surging above $1.35. But In the unlikely event that a no-deal wins support, sterling could crash below $1.27.

The Brexit votes will probably steal the limelight away from other important events in the UK. Monthly GDP, trade and production numbers are due on Tuesday, while the UK’s finance minister, Philip Hammond will make his Spring budget statement on Wednesday. Hammond is predicted to reaffirm his promise of big spending increases as the UK’s public finances improve, but the giveaway will be conditional on MPs approving a smooth Brexit.

Looking at the data, UK GDP is expected to have expanded by 0.2% month-on-month in January, recouping half of the lost output in December. Industrial production is also projected to grow, though only marginally, by 0.1% m/m. But manufacturing output is expected to have stayed flat in January.

The European calendar will be relatively light in the coming week but industrial output numbers for January should attract some attention as traders look for signs of green shoots in the Eurozone economy. Germany will report its industrial production estimate along with export stats on Monday. Output is forecast to have increased by 0.5% m/m in January, which could make it the first growth in five months. The Eurozone-wide figures will follow on Wednesday, while on Friday, the final inflation print for February will be published. No change is expected to the flash reading of 1.5% y/y for the headline rate.

After slumping to 21-month lows this week on the back of a very dovish ECB, the euro could come under further pressure if there are no positive elements in the data.

US retail sales and inflation in focus

The US dollar soared to the highest in almost three-months against a basket of currencies this week as most of its peers floundered. The greenback’s relative attractiveness could continue to be highlighted next week if the upcoming data maintain the view that US economic fundamentals remain sound despite moderating growth.

Kicking off the week on Monday are January retail sales. US consumers sharply cut back their spending in December, raising doubts about the US growth momentum. However, retail sales are forecast to have risen by a modest 0.2% m/m in January, recovering partially from December