With a Brexit Extension in Sight, What’s the Outlook for Sterling? 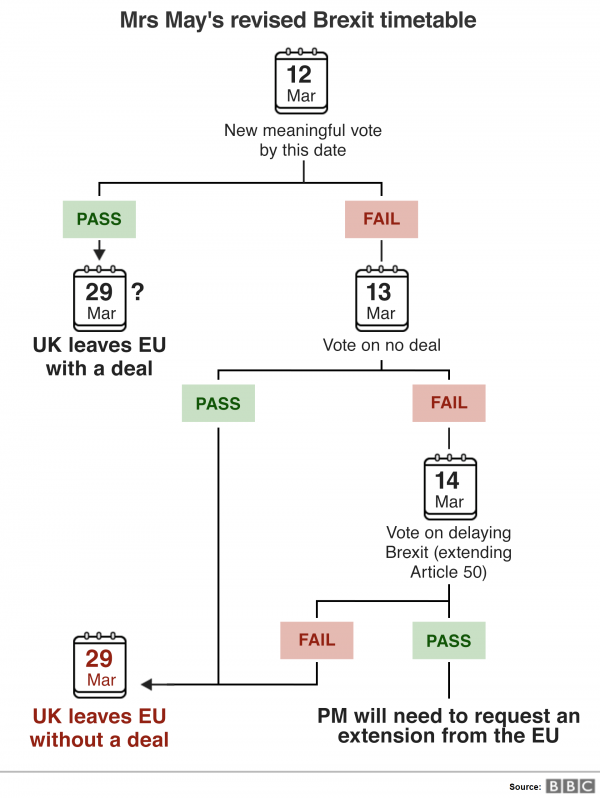 The coming week will be a crucial one for the Brexit process, as the UK Parliament will finally have a chance to vote for an extension of the exit date. Alas, even if that happens, such a delay would only be a one-time trick, so ‘something has to give’ by the summer. While the eventual destination for sterling is likely to be higher from current levels, the fact that the deadlock is unlikely to be resolved over the coming months suggests more pain may be in store for the British currency, before the ultimate rally.

The Brexit saga continues to rumble on, with British lawmakers rejecting Prime Minister May’s deal at the turn of the year, opting instead to send their leader back to Brussels to seek more concessions that would make the accord more palatable. The main issue revolves around the Irish border. Namely, how to avoid a hard border between Northern Ireland the Republic of Ireland, if the two sides fail to reach a deal on frictionless trade in two years’ time. In this scenario, Brussels says the entire UK should remain in a customs union with the EU, ensuring no checks along the Irish border until a better solution is found – this has been dubbed as the ‘Irish backstop’. However, London worries it may be trapped in a customs union indefinitely, which would prohibit the UK from striking its own trade agreements around the world.

Hence, Theresa May is now trying to squeeze out some ‘legally binding’ assurances from the EU that if the Irish backstop ever does come into effect, it will be for a limited time only, or the UK should have a unilateral mechanism to exit from it. Unfortunately, this is where the deadlock begins. The EU has repeated time and again it won’t grant such legally binding pledges, as a time limit would defy the purpose of the backstop, which is meant to be an insurance policy against worst-case outcomes.

A week is a long time in politics

This brings us to the upcoming week, and the crucial Parliamentary votes that will take place on Tuesday, Wednesday, and Thursday. The first will be on Theresa May’s Brexit deal. As a reminder, back in January, this accord was voted down by the largest margin in Parliament’s history. Considering that the EU hasn’t granted any meaningful changes since then, and that according to media reports any changes it will grant won’t be legally binding, this deal will probably suffer the same fate – rejection.

Assuming this is indeed rejected again, the next vote will be on whether Parliament would allow the UK to leave the EU on March 29 – the official exit date – without a deal. Bearing in mind that lawmakers already voted in favor of an amendment that would forbid a no-deal Brexit recently, and in fact this was the catalyst behind the pound’s latest rally, it seems likely there will be a majority that votes against a devastating no-deal exit once more.

Finally, the last and perhaps most crucial vote on Thursday will be on whether the government should ask the EU for an extension of the exit date. This is the tricky part, because even though it’s reasonable to assume that lawmakers voting against a no-deal Brexit would also vote in favor of a delay given our proximity to March 29, things aren’t always so simple in British politics. The implication is that while the most likely outcome is an extension, this is by no means a ‘sure thing’.

Let’s suppose things play out as expected and lawmakers instruct May to seek an extension. The question then becomes: for how long, and for what purpose? On the former, any extension is unlikely to last longer than a few months – let’s say three, more or less. The issue is that for the UK to get a longer extension it would probably need to participate in the European Parliament elections in May, and since there is no appetite for that in Britain, the new exit date would likely be set for June-July, just before the new EU Parliament begins its term. In short, any extension will probably be a short one, and is unlikely to be repeated.

As for what the purpose of the delay would be – nobody really knows. Pro-EU moderates argue it would be an opportunity to negotiate a softer, Norway plus, type of Brexit. Others suggest it could allow the UK more time to prepare for a no-deal outcome, a so-called ‘managed no-deal’. Remainers want to use that time to organize another referendum. It’s safe to say there is no clear consensus for anything, other than the fact that leaving without a deal would be a disaster.

It’s a long way to the top

What does this all mean for the pound? In the immediate term, sentiment will be driven by these Parliamentary votes. If by next Thursday everything goes as expected and the UK asks for an extension, sterling could see some upside, though nothing spectacular as this is probably the market’s base-case scenario already. However, in the unlikely event an extension is voted down, then the pound could collapse, as a no-deal exit would become the default.

On a slightly longer timeframe, so over the next 2-3 months, the outlook for the British currency remains grim. Simply put, there’s no breakthrough on the horizon, and we could be staring down the barrel of the same exact deadlock come summer. Neither side seems ready to make real concessions, and it may come down to the wire – i.e. a few days before the extension ends – before politicians feel enough pressure to make meaningful compromises. Hence, uncertainty is set to remain elevated for a while longer, keeping the risks surrounding the pound tilted to the downside in the near term.

Looking further out, however, the outlook for the British currency is quite bright. Again, it’s simple if one strips out all the noise: the UK Parliament has c