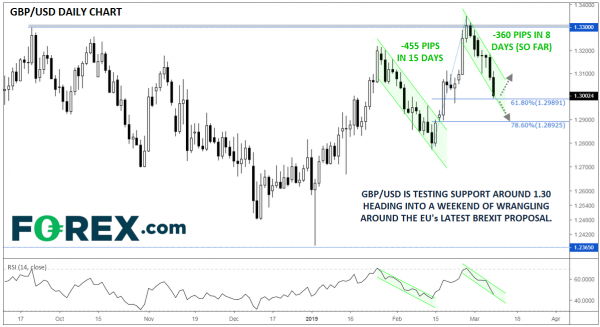 Just hours ago, my colleague Fawad Razaqzada noted that “it was not clear whether any real progress was made by Britain and the European Union in reaching an accord.” While there haven’t been any official statements, much less votes, the EU’s latest offer has reportedly been called a “non-starter” by the DUP and not enough of a change from the previously rejected offers.

We’ll see what this weekend’s wrangling brings ahead of Tuesday’s vote, but the early signs aren’t promising. Forward-looking traders have already started selling GBP/USD, taking the pair down to test the 1.30 handle at the European session close. As the chart below shows, the 61.8% Fibonacci retracement of the most recent rally comes in at 1.2990 and may provide near-term support.

Bullish readers may want to watch for the RSI indicator to break out of its bearish channel before committing too aggressively – note that GBP/USD’s RSI broke out of its channel a day before price eclipsed its corresponding bearish channel back in mid-February.

That said, GBP/USD has “only” corrected 360 pips over the past 8 trading days; to match the late January / early February correction, rates would have to fall approximately another 100 pips toward the 78.6% Fibonacci retracement near 1.2900 over the next 7 trading days.