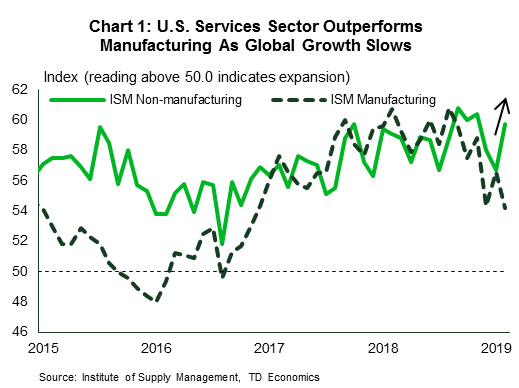 In a welcome change from the recent doom and gloom, this week started off on an upbeat note. An uptick in the ISM non-manufacturing index got the ball rolling. Diverging from its manufacturing counterpart, the headline rose 3.0 points to 59.7 in February, reversing two consecutive declines in the prior months. An improved performance in the services sector is echoed in consumer confidence that rebounded with the conclusion of the partial government shutdown and a turnaround in equity markets. It also reaffirms that domestic demand remains solid, corroborated by gains in all 18 industries in February.

Housing data was also encouraging this week. Sales of new homes rose 3.6% in December, edging higher for the second month in a row. Ditto for housing starts. After ending 2018 on a sour note, homebuilding started the year on better footing with starts surging by 18.6% in January. The gain in single-family construction was even more impressive, with starts up by 25% – the highest monthly gain since 1979. As we discuss in our recent report, the housing market has room to grow and demand should rebound alongside rising affordability. With low vacancy rates, housing construction should continue to make gains over the next year.

The positive economic news faced a setback on Friday as the payroll report showed job growth slowing to just 20k new jobs in February. The headline was a big miss on expectations, but notably came after two months of strong consensus-beating gains. There was also plenty of encouraging news in other parts of the report. The unemployment rate edged lower, the labor force participation rate maintained January’s gain and hourly earnings accelerated, rising to 3.4% year-on-year – the fastest pace in almost ten years.

There is good reason to look past the dour headline, which was probably influenced by temporary factors and poor weather. We expect job growth to slow in the months ahead, but it will be on the back of a labor market that for all intents and purposes has achieved full employment rather than any pronounced deterioration in domestic demand.

Still, the soft payroll print will reinforce the Federal Reserve’s current “patient” approach. On that front, the Federal Reserve has been joined by other global central banks. This week, the ECB unveiled a package of cheap funding for the Eurozone’s banks and said it would keep rates on hold until 2020 on the back of softening economic momentum and rising uncertainty related to Brexit and trade. The Bank of Canada’s statement this week was similarly dovish – noting the increased difficulty in reading the economic tea leaves given the increase in global crosscurrents. The dovish turn in other global central banks means the U.S. dollar is likely to remain relatively strong, giving the Fed even more reason to remain on the sidelines until at least the second half of this year.

Much like its counterparts around the world, the Bank of Canada this week recognized the deterioration in the economic outlook and the haze of uncertainty around the future course of policy. On Wednesday, it left the overnight rate unchanged at 1.75%. Its statement made clear that it is not looking to increase its policy rate any time soon.

Outside the Labour Force Survey (LFS), the economic data has been unambiguously bad. Even more concerning for the central bank is that the weakest data is in segments of the economy most sensitive to interest rates – namely business investment, housing, and consumer durable goods spending. Investment in both non-residential and residential sectors fell off a cliff in the second half of 2018, and durable goods spending has fallen for three straight quarters.

The data for early 2019 suggest that the pain continued in the first quarter, especially in the housing market. Home sales fell in Toronto and Vancouver in February according to local real estate board data. Meanwhile, housing starts plummeted across the country in the same month.

Given the available data, the Canadian economy appears more likely to have shrunk in the first quarter of the year than shown any meaningful growth. This is not the narrative the Bank of Canada was hoping for. A slowdown in housing and related consumer spending has long been anticipated, but it has come faster and more furiously