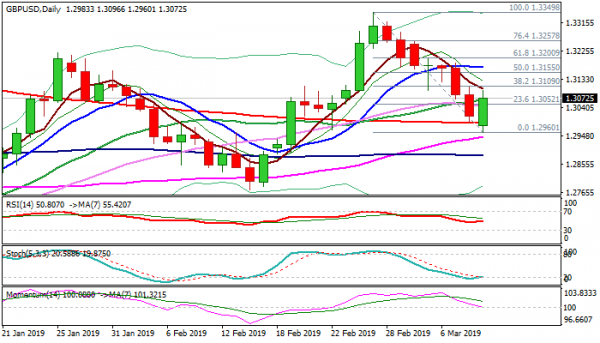 Cable ticked higher and pressures 1.31 barrier in early US trading on Monday, as traders took profits from short positions and re-positioning for fresh weakness in anticipation of another defeat of UK PM May on tomorrow’s important parliamentary vote on her Brexit plan.

May is due to travel to Strasbourg this afternoon in last attempts to break Brexit talks deadlock after the parliament voted it down.

The disagreement about the Irish border remains the main obstacle and the EU is willing to help in this case but not ready to compromise with bloc’s core priorities that keeps PM May under pressure.

Daily techs show signs of easing of bearish pressure, as stochastic and RSI turn higher after so far false break below 200SMA and subsequent bounce, but momentum remains weak and suggests limited recovery.

Sustained break below 200SMA would generate strong bearish signal which would require confirmation on probe through daily cloud top (1.2944).