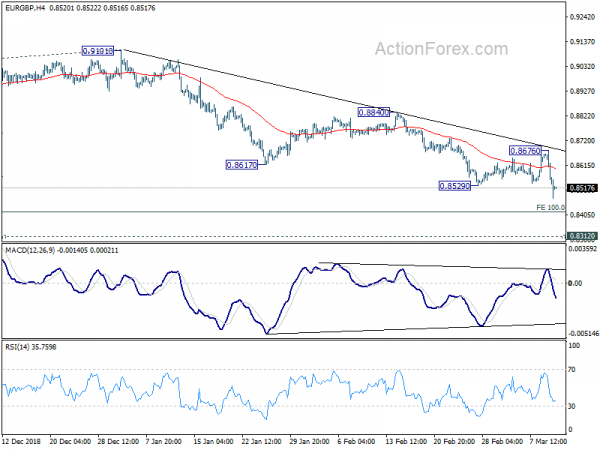 Sterling made a massive come back and is trading as the strongest one for today, as boosted by breakthrough in Brexit. At least, UK Prime Minister Theresa May believe she got important legally binding changes that’s adequate to satisfy the parliament. The Pound could be given further lift ahead if more positive comments come in. For now, New Zealand Dollar is trading as the second strongest, followed by Euro. Meanwhile, Yen is now the weakest one as risk appetite staged in strong come back. But Loonie and Australian are the second and third weakest.

Technically, EUR/GBP’s break of 0.8529 support confirms resumption of fall from 0.9101 as well as medium term down trend from 0.9305. GBP/USD and GBP/JPY would likely have a take on 1.3350 and 148.57 resistance respectively with current rebound. EUR/JPY’s break of 125.34 minor resistance suggests that it’s defended 124.23 key support and more upside would likely be seen, even though it’s too early to call for rally resumption. Dollar is staying in near term consolidation against others, including Euro, Swiss, Yen, Aussie and Loonnie. The corrective retreats could end any time, together or separately. That could depend on CPI reading from the US.

Sterling jumps as May got legally binding changes to Brexit deal

Sterling jumped broadly and remains firm after UK Prime Minister Theresa May secured “legally binding” changes to the Brexit deal after meeting with European Commission President Jean-Claude Juncker in the European Parliament in Strasbourg, France late Monday. May will now go into today’s meaningful vote with nervous hope that the deal would be approved and pave the way to an orderly Brexit. Opposition Labour leader Jeremy Corbyn criticized as usual that May’s negotiations had “failed” without “anything approaching the changes” she promised the Parliament. But it would be the legal advice from Attorney General Geoffrey Cox, which will be published before the vote, that holds the fate of the updated deal.

Two important agreements were agreed that could “strengthen and improve” both the withdrawal agrement. The most important one is a “joint legally binding instrument.” May believed it could be used to start a “formal dispute” against EU if it tried to keep UK into the backstop indefinitely. And under ruling of an arbitration panel, UK would have “the right to enact a unilateral, proportionate suspension of its obligations under the Withdrawal Agreement”

Secondly, there is another “joint statement” adding to the political declaration. A specific negotiating track would be established given both sides’ to work “at speed” on an agreement by end of 2020 to avoid triggering the Irish backstop. Thirdly, May will put forward a “unilateral declaration” to outline the UK’s position that there was nothing to prevent it from leaving the backstop arrangement if discussions on a future relationship with the EU break down and there is no prospect on an agreement.

EU Juncker: No third chance, no further interpretations or assurance, this deal or no Brexit

After giving May the needed “meaningful clarifications and legal guarantees” on Irish backstop, Juncker warned in a joint press conference that “there will be no third chance”. He said “it is in this cooperative spirit today that Theresa May and I agreed on a joint legally binding instrument relating to Withdrawal Agreement. The instrument provides meaningful clarifications and legal guarantees on the nature of the backstop.”

Australia NAB Business Conditions dropped to 4 in February, down from 7 and missed expectation of 5. Business Confidence dropped to 2, down from 4 and missed expectation of 3. Alan Oster, NAB Group Chief Economist said “conditions declined in February to below average levels – with profitability and trading now below average.” Employment index “remained resilient” but that is “likely reflecting that labour demand decisions typically lag economic activity.” Forward looking indicates point to an “ongoing weakness in business conditions” And, “this may have important implications for both future investment and employment decisions of business.” The survey suggests “little improvement” in Q1 and “some further growing risks to our outlo