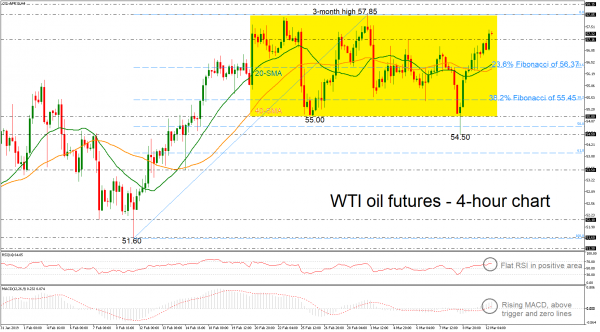 WTI oil futures jumped to a new one-and-a-half-month high of 57.43 earlier on Tuesday, remaining above the 23.6% Fibonacci retracement level of the upward movement from 51.60 to 57.85 around 56.37 and the 57.16 strong support level. The price has been trading in a narrow range within 55.00 – 57.85 over the last three weeks. However, technical indicators are holding in positive territory with the RSI flattening and the MACD strengthening its momentum.

A bullish rally could find immediate resistance at the 3-month high of 57.85 before touching the 58.15 barrier, taken from the highs on November 2018. More advances could drive WTI until 59.90 taken from the bottom on March 2018, shifting the neutral bias to bullish.

In case of a successful penetration to the downside of 57.16, oil prices would rest at the 23.6% Fibonacci of 56.37, which stands around the 20- and 40-simple moving averages (SMAs). A downside extension could push the price until the 38.2% Fibonacci of 55.45, while even lower, the price could penetrate the channel to the downside, creating a bearish tendency.


Overall, the short-term bias is in a bullish correction mode after the rebound from the 18-month low of 42.50, despite the very short-term neutral view.