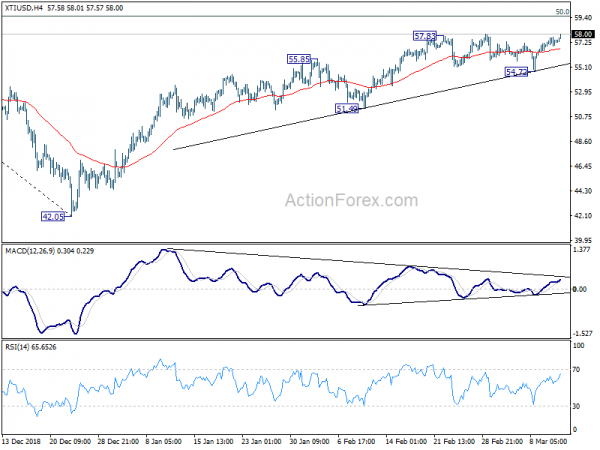 The financial markets are pretty directionless and traders await vote on no-deal Brexit in the UK parliament. Sterling remains the strongest one for now on recovery. But upside is limited below near term resistance against other major currencies. That is, the Pound is merely gyrating in recently established range. Canadian Dollar follows as the second strongest, as WTI crude oil jumps to as high as 58.01, resuming recent up trend. Nevertheless, other commodity currencies are left behind with New Zealand and Australian Dollar as the weakest ones.

Technically, an immediate focus will be on 1.3301 in USD/CAD. Break there will dampen the original view of bullish reversal. Instead, that will signal that USD/CAD has completed recent rebound from 1.3068 and deeper fall could be seen back to 1.3112 support. GBP/USD, EUR/GBP and GBP/JPY staying in familiar range. We’re expecting sustained breakout today, unless UK votes for no-deal Brexit.

UK Parliament is set to vote on no-deal Brexit today at 1900GMT, which will likely be rejected. Then there will be another vote tomorrow for seeking Article 50 extensions. Responses from the EU so far are not very positive regarding an extension.

The European Parliament’s lead Brexit spokesman Guy Verhofstadt warned that he would oppose to even 24-hour extension. He said ” I am against every extension, whether an extension of one day, one week, even 24 hours, if it is not based on a clear opinion of the House of Commons for something, that we know what they want.” Verhofstadt also warned that “An extension, where we go beyond the European elections, and the European elections will be hijacked by the Brexiters, and by the whole Brexit issues. We will talk only about that, and not about the real problems, and the real reforms we need in the European Union.”

EU chief Brexit negotiator repeated his question that “extend this negotiation — what for?” And he reiterated that “if the UK still wants to leave the EU in an orderly manner, this treaty is — and will remain — the only treaty possible”. Barnier also told the European parliament that “We are at a critical point. The risk of no-deal has never been higher. That is the risk of an exit – even by accident – by the UK from the EU in a disorderly fashion. I urge you please not to under-estimate the risk or its consequences.”

European Union’s Economic Commissioner Pierre Moscovici said “we have done everything we could do.” And, “it is tome now for the British to say what they want, now that they said what they don’t want.”