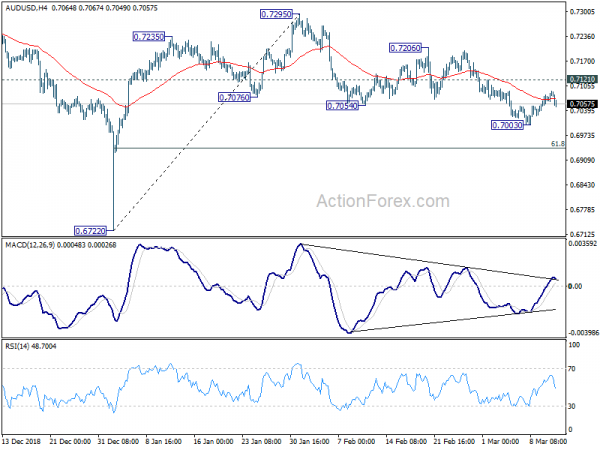 After much volatility in the past 24 hours, Sterling is staying in familiar range against Dollar, Euro and Yen. UK Prime Minister Theresa May’s Brexit deal was voted down by the Commons. That puts Brexit back into the original path. A no-deal vote will be held today and is expected to be rejected too. The breakthrough could come tomorrow with the vote on Article 50 extension. The UK Parliament might finally tell the world what the majority supports, rather then just what they reject.

The Pound is currently the strongest one for today. Yen follows as the risk appetites fades again. More importantly, global treasury yields dropped rather notably, likely on safe haven flows. US 10 year yield closed at 2.605, just barely defended 2.6 handle. 30-year yield lost 3.0 handle to close at 2.988. Swiss Franc follows as the third strongest so far. On the other hand, Australian Dollar is the weakest one, partly weighed down by deteriorating consumer sentiment. New Zealand and Canadian Dollar are the next weakest.

Technically, GBP/USD, EUR/GBP and GBP/JPY are staying in range. We’d prefer to see the Pound to break out in the same direction in these pairs, sustainably, before confirming the breakout. AUD/USD’s dip today might suggests completion of recovery from 0.7003. And the pair could return to this 0.7 handle ahead. EUR/USD’s recovery, while strong, is still viewed as a corrective rise. It should start to feel heavy above 4 hour 55 EMA and lose momentum well ahead of 1.1419 resistance.

UK Prime Minister Theresa May’s Brexit deal was voted down again in the Commons overnight, despite the last minute concessions from EU. MPs voted 391-242 to reject the deal, an insufficient improvement from January’s 432-202 votes. Now, a vote on no-deal Brexit will be carried out at 1900GMT on Wednesday. If no-deal is voted down, there will be another vote on Thursday for seeking Article 50 extension.

May warned after the defeat. “Let me be clear. Voting against leaving without a deal and for an extension does not solve the problems we face.” And, with the government at impasse, she asked “Does it wish to revoke Article 50 (announcing intention to leave the EU)? Does it want to hold a second referendum? Or does it want to leave with a deal, but not this deal?”

EU President Donald Tusk’s spokesman said the EU has done “all that is possible to reach an agreement” and the solution “can only be found in London.” The results now increases the risk for UK to crash out the EU without a deal. And he emphasized that there needs to be a “credible justification for a possible extension and its duration.”

UK CBI: Extending Article 50 to close the door on no-deal is now urgent

In a rather short statement, UK CBI Direct-General Carolyn Fairbairn expressed the frustration on the parliament’s Brexit circus. She said: “Enough is enough. This must be the last day of failed politics. A new approach is needed by all parties. Jobs and livelihoods depend on it. Extending Article 50 to close the door on a March no-deal is now urgent. It should be as short as realistically possible and backed by a clear plan. Conservatives must consign their red lines to history, while Labour must come to the table with a genuine commitment to solutions. It’s time for Parliament to stop this circus.”

EU sets out 10 actions on relationship with systemic rival China

The European Commission sets out 10 actions to discuss regarding the relationship with China. In the statement, EU described China a “cooperation partner” and “negotiating partner”. Also, it pointed out that China is a “systemic rival promoting alternative models of governance.”

Vice-President, High Representative for Foreign Affairs and Security Policy Federica Mogherini, said it’s the aim of the actions to “strengthen our relations with China, in a spirit of mutual respect.” Vice-President Jyrki Katainen, responsible for jobs, growth, investment and competitiveness, said EU would act to “strengthen its competitiveness, ensure more reciprocity and level playing field, and protect its market economy from possible distortions.”

There are a few points within the 10 actions that are worth noting.

Australia Westpac Consumer Sentiment dropped sharply by -4.9 to 98.8 in March, down from 103.8. That’s the lowest level since September 2017. Also, with sub-100 reading, pessimists outnumbered optimists again. The release of the national accounts update