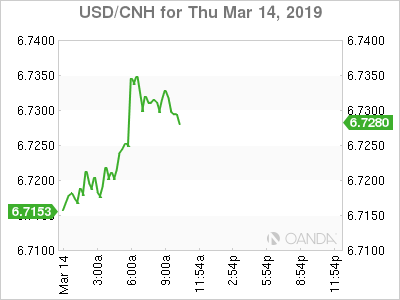 Presidents Trump and Xi have decided to move back a potential summit to finalize a trade agreement to April, signaling both sides still can’t reach an agreement as major issues still can’t be resolved.  At the beginning of the month, expectations were for both leaders to meet by mid-March and now the certainty of a deal happening is starting to wane.  US stocks erased earlier gains and commodity currencies extended their decline on the news of the trade deal delay.

The data continues to be downright ugly in China and if trade talks continue to drag on, we could see Asia Pacific markets under pressure.  Chinese industrial output growth declined to a 17-year low while retail sales continued weaken.  Many are believing we are near the low with industrial production as fiscal stimulus will slowly kicking and monetary policy easing is likely to ramp up.  China will likely show more signs of stabilizing if they get a trade deal done with the US.  If a deal is delayed heavily, we probably will see more stimulus from China.

General Electric may need lessons on how to air out your dirty laundry.  At the beginning of the month, they warned that cash flow would likely be negative in 2019.  Today’s announcement confirmed that industrial free cash flow would be as low as $2 billion.  GE is expecting cash flow to be positive in 2020 and 2021.  They also provided full year EPS guidance of $0.50 to $0.60 which was well below the $0.67 analysts’ estimate.  CEO Culp’s turnaround is hampered by GE’s $100 billion debt problem.  If this is the last of the bad news, GE shares may continue to stabilize.  Shares turned higher after CEO noted he sees the power business bouncing back next year.

The third day of Parliamentary voting will see UK lawmakers vote on the postponement to the March 29th deadline.  The EU appears open to a deadline if the UK can give them a good reason on why the need for a delay.  With many Brexit scenarios still out there, it appears that PM May could let it all hang on one last, maybe the third time is the charm meaningful vote next week.  After substantial defeats in both votes, it is difficult to believe she will be able to convince Brexiteers and DUP to vote on her Brexit deal.  If she is successful, the UK could request a short extension. The base case scenario is that May’s third deal is voted down again, and we see a longer extension to allow new leadership to restart negotiations with the EU.

Crude prices remain supported as tightness with US crude and fuel stockpiles and relentless reiterations from OPEC that production cuts amongst the group and allies will continue till year end.  The rally with West Texas Intermediate crude is also supported by the sanctions being imposed on Venezuela and Iran crude and if we continue to see draws with US inventories, we may see a clear path towards $60 a barrel and possibly the $64 region.

The yellow metal fell back below $1,300 an ounce as the US dollar rallied across the board and markets digest news of a trade deal delay.  The overall upbeat mood seen with European equities also kept pressure with gold prices and if we see a continued move higher with US stocks, we could see further pressure for the precious metal.