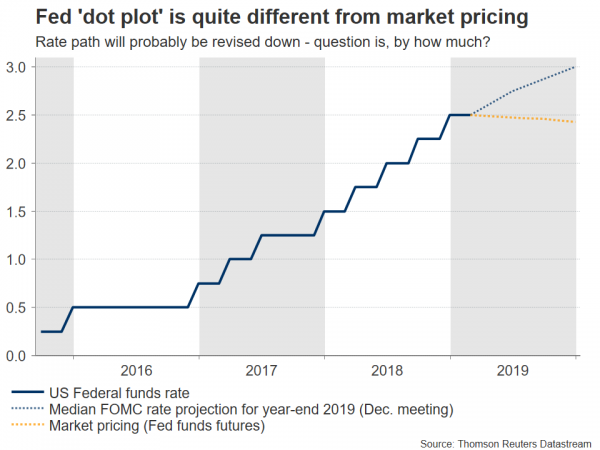 Traders will be glued to their screens next week amid a barrage of crucial events, ranging from a highly-anticipated Fed policy meeting to even more Brexit votes in the British Parliament. At the same time, almost every major economy will see the release of data that could be decisive for their respective currencies, particularly considering the synchronized shift by central banks towards a more ‘cautious’ stance lately.

Fed decides: All eyes on the new ‘dots’

Arguably the main event in the coming week will be the Fed policy meeting, which concludes on Wednesday. No action is anticipated, so market attention will fall on the new economic forecasts, Chairman Powell’s press conference, and the updated interest rate projections in the so-called ‘dot plot’.

Fed officials adopted a much more cautious tone in early 2019, indicating they’ll put their rate-hike plans on ice for the time being while they monitor the risks surrounding the economy. In other words, policymakers sent a clear signal that they won’t touch the hiking button again for at least a few months, or perhaps not at all, depending on how risks evolve – most notably the slowdown in US and global growth. The message was well understood by traders, with market pricing for rate hikes in 2019 evaporating instantly. In fact, futures markets now indicate a modest probability for rate cuts this year, not hikes.

Yet, the latest ‘dot plot’ back in December still pointed to two rate increases in 2019. Hence, investors will focus on by how much these rate projections will be revised lower this time. Specifically, will policymakers keep even a single rate increase in 2019 on the table, or will the median ‘dot’ be marked down more severely to indicate no hikes at all this year? In the context of markets now seeing greater odds for rate cuts moving forward, a dot plot pointing to even one hike in 2019 could come as a ‘hawkish surprise’, putting the wind back into the dollar’s sails.

BoE meeting and raft of UK data eyed, as Brexit saga drags on

Brexit will remain front and center in the UK, with PM May expected to make a third attempt of pushing her deal through Parliament next week, by Wednesday at the latest. Alas, pound traders will have much more to digest, as the Bank of England (BoE) will also conclude its policy meeting on Thursday, while key economic data will be published throughout the week. Generally speaking, politics will probably continue to overshadow economics in driving the British currency overall.

In politics, UK lawmakers overwhelmingly rejected the government’s Brexit deal for a second time this week, instead voting to delay the exit date. Now, attention turns to how long such an extension will be. If Parliament somehow changes its mind and approves May’s deal the third time, then the UK will ask Brussels for a short extension until June at the upcoming EU summit on Thursday. However, if MPs stick to their guns and vote it down again, then a much longer delay of up to 2 years may be requested. The former outcome would likely boost sterling on the news as uncertainty dissipates. Meanwhile, although the latter scenario may initially hurt the currency, such a lengthy delay could also raise the likelihood for another referendum, so it may be a bullish outcome in the longer term as well.

In the economic arena, employment, inflation, and retail sales data will hit the markets on Tuesday, Wednesday, and Thursday respectively. The lion’s share of attention though will be on the BoE gathering. No action is expected and admittedly, the Bank has its hands tied amid the political uncertainty. The economy has no doubt slowed but the Bank seems unwilling to shift to a more dovish stance, reasoning that it should just be patient for now as an ‘orderly’ Brexit outcome can dispel much of the uncertainty by itself and hence, kickstart investment and growth. Overall, the BoE is unlikely to deviate much from this stance, but if there is any change, it’ll probably be towards a more cautious bias.

The Swiss National Bank (SNB) will announce its quarterly decision on Thursday. The infamous central bank has moved out of the spotlight lately, but that doesn’t mean policymakers have taken their foot off the accelerator. The nation still has the lowest interest rates globally, and that’s unlikely to change anytime soon. Swiss economic data remain soft, with inflation barely picking up and growth struggling. Meanwhile, Switzerland’s main export market – the Eurozone – is losing steam.

Perhaps most importantly, the ECB has turned dovish lately. Hence, the SNB will probably maintain an ultra-cautious tone, reiterating that negative interest rates are needed and that it will continue to intervene in the FX market if needed to weaken the franc. Anything short of that could trigger a sharp rally in the franc, particularly against the euro, which would undermine the SNB’s inflation-lif