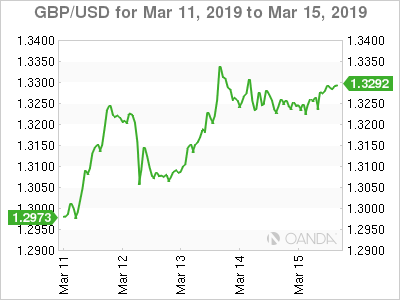 The US dollar is lower against most major pairs on Friday. The greenback was higher on Thursday as investors sought refuge after the Brexit drama and the apparent delay in the US-China negotiation. President Trump later said that news is upcoming in the next 3-4 weeks, once again boosting optimism that the two largest economies will reach a deal. News of a delay have now been digested, but the praise from Trump on the negotiations brought back risk appetite to investors who sold the US dollar.

The wires were also full of hope on an extension being granted by the EU on the Brexit deadline. There are still a lot of work to do to move parliament from its current fragmented form into a consensus that approves a workable deal.

Brexit Drama to Continue as BOE Shares the Stage

The GBP/USD rose 2.09 percent in the last five trading days. The pound is higher against the greenback after the UK parliament voted to seek an extension of the Article 50 deadline. There was plenty of volatility during the week as the UK parliament voted on British Prime Minister Theresa May’s proposal, a no-deal exit and other amendments which included the extension. May was once again defeated, but lawmakers voted for a no-deal divorce boosting the pound. Near the end of the week the extension vote was victorious but with the caveat that it needs to be ratified by all 27 EU members.

Theresa May will try once again to get her proposal to pass on the same week the Bank of England (BoE) is scheduled to warn investors about the dangers of a no-deal exit, that although has been voted in parliament is dependent on an agreement being made to fully rule out the possibility of that scenario becoming a reality. A defeat on her third attempt could mean the UK would need a longer extension and even a second referendum is back on the table at that point. British economic indicators to watch out for during the week include the jobs report, inflation and retail sales.

Gold rose 0.51 percent on Friday. The yellow metal climbed above the $1,300 price level but remains in a consolidation pattern. The softness of the dollar after disappointing economic indicators and lack of demand for the greenback as a safe haven appreciated the value of gold.

Gold will remain on the mind of investors ahead of a busy week. The U.S. Federal Reserve and the Bank of England (BoE) will hold court, along with a plethora of economic indicator releases and to top it off the UK parliament could hold a Brexit vote on March 19.

Oil fell on Friday after hitting a 2019 high. The fragile balance between the OPEC+ crude output limit and the rising production in the US is easily disrupted. Higher oil production and question marks about global demand won out at the end of the week with crude prices retreating.

The ongoing OPEC+ agreement could be extended which is why prices could be higher in the second quarter to the year as the production cap soaks up excess capacity, even with a big push from US producers.

Sanctions against Iranian and Venezuelan crude exports could accelerate the upward trajectory given that global demand for energy appears steady at current prices. OPEC compliance has been high, but it remains to be seen if all members in particular the leaders Saudi Arabia and Russia are willing to keep limiting their revenue beyond April.

Global stocks rose on Friday after news that China is ready to keep adding stimulus to its economy looking to regain its growth momentum. The words from President Trump praising the Chinese in their negotiation with hopes that an announcement will be made on the US-China trade deal in three weeks. The announcement of Friday of a new foreign investment law was seen as a sign of goodwill from the Chinese.

Tech was a big driver with Broadcom leading the charge as semiconductor stocks were in demand. Boeing shares rebounded after the global grounding of the 737 Max jetliners has impacted the stock.