The Weekly Bottom Line: Sitting at Neutral, Slogging Towards Normal 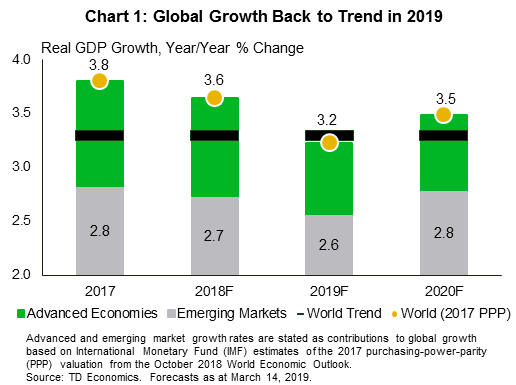 In a year marked by high expectations for deals, 2019 is shaping up to be a rough year for the global economy, and advanced economies in particular. Our new quarterly economic forecast expects global growth to slow to 3.2% in 2019 from 3.6% last year (Chart 1). That’s down about 0.2 ppts from our December outlook.

This outlook is consistent with global demand growing roughly at the same pace as capacity, and, correspondingly, subdued inflation pressures. However, the headline print itself masks the disparate regional challenges. For example, a soft end to 2018 and a disappointing start to 2019 results in a much weaker growth outlook for G7 economies this year. Add a global manufacturing slump, and you have the impetus for a relatively weak economic expansion relative to past years. Downgrades like this justify the pivot to patience by G7 central banks. Interest rate hikes are effectively cancelled through the end of 2019.

In contrast, economic activity in the developing world is expected to heat up later this year. An anticipated improvement in global manufacturing activity, weaker inflation and lower global interest rates all support a firmer outlook in emerging market economies. That said, a slowing Chinese economy and elevated trade policy uncertainty vis à vis the U.S. could weigh further on major trading partners, stifling any sort of rebound in global economic activity.

The U.S. economy is expected to prove more resilient than its G7 peers (Chart 2). Although it too will see growth slow in 2019, the decline is largely due to the waning impulse from fiscal stimulus. Growth for 2019 is still expected to average an above-trend pace of 2.4%, half a point shy of last year’s strong performance. The government shutdown and continued phenomenon of residual seasonality weigh heavily on the first quarter, bringing down the annual average. However, both consumer and business spending fail to rebound to the heady quarterly growth rates observed in 2018 through the remainder of this year.

Spending on consumer durables, such as automobiles, is expected to decelerate. Moreover, although a rebound in housing activity is expected later this year, very weak momentum acts to ensure that residential investment contracts for a second consecutive year. Net trade is also expected to weigh on growth again this year, with import demand outpacing exports.

The data this week acted to support this outlook. January retails sales staged a solid rebound from December lows. Combined with solid wage gains in February’s employment report, this sets the table for an uptick in economic activity later this quarter. That said, geopolitical events this week proved less constructive. Trade talks between Presidents Trump and Xi have been punted to at least April, and Brexit will likely be delayed at least through June. This suggests that elevated political and trade policy uncertainty will continue to weigh on global economic activity for at least a couple more months.

The economic data this week painted a generally downbeat picture. The one exception was manufacturing sales, which rose 1.4% in volume terms in January (see commentary), a strong report that was still not enough to offset the weakness seen in late 2018. Beneath the strong headline, forward looking components (new and unfilled orders) were soft.

Striking a less positive note was Statistics Canada’s snapshot of Canadian finances at the close of 2018, showing that the stresses on households continue to mount (see our commentary). Past interest rate increases are continuing to manifest. The debt service ratio rose to 14.9%, just shy of its prior peak in 2007 (Chart 1). Household borrowing ran ahead of incomes again in 2018Q4, sending the debt-to-income ratio to 178.5%. The asset side of the equation was similarly discouraging. Household wealth fell 2.8% quarter-on-quarter. The value of natural resources dropped due to soft oil prices, while late-2018 market volatility took down the value of financial assets. The good news is that recent developments in these categories have been positive. Oil prices are up markedly from their late-2018 doldrums, and the S&P/TSX index has had a roaring start to the year, up more than 12% year-to-date.

The other major driver of falling household wealth was real estate, and here the s