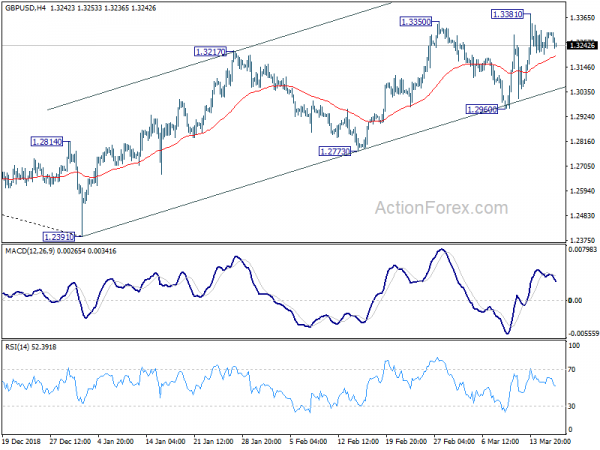 Sterling is trading as the weakest one for today so far after suffering some selling in European session. No support is seen for the Pound even though high profile Brexiteer Jacob Rees-Mogg indicated that he might support Prime Minister Theresa May’s Brexit deal. However, loss is limited in Sterling as the overall picture remains unclear. For now, it’s uncertain whether the government will pull tomorrow’s Brexit meaningful vote due to far insufficient support.

Staying in the currency markets, Australian Dollar was lifted earlier today by strong rally in Chinese stocks. But it lost some momentum after European markets turned mixed. Also, the Aussie will facing tests from RBA minutes as well as house price data in the upcoming session. Euro picked up some strengthen even though Bundesbank warned of subdued German growth in Q1. Rise in German yield is unpinning Euro for now. Overall, the markets lack clear direction in early US session.

On the other hand, construction and private consumption should provide support to the economy. Employment also continues to rise despite slowdown. Bundesbank added that private consumption could pickup significantly as signaled by strong increase in retail sales.

German FM Scholz : Some richer countries only think of their own interest

German Finance Minister Olaf Scholz warned in at the World Policy Forum in Berlin that trade conflicts are damaging the world. Without naming any country, he singled out “richer countries” who only think of their own interest. At the same time, he also urged Europe to have one voice to have more bargaining power.

Scholz said “trade conflicts, as we have seen over the last months – especially between richer countries only thinking of their own interest – are damaging the world economy”. He added that “trade policy has been an EU-level responsibility for a long time”. And, “it is obvious that we have much more bargaining power if we speak with one European voice… only together we are able to set and enforce standards of fair trade.”

Reuters reported that EU is