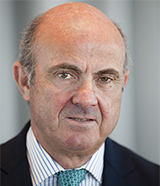 The idea that German government support for a Deutsche Bank-Commerzbank merger is back-door nationalization – bringing Deutsche to heel, not just facilitating a bailout – reflects an ever-clearer reality in European banking. Unrelenting reassertion of public control over European banks is the biggest cause, not just the result, of their widening profitability gap and their increasing lag in terms of international assertiveness versus the Americans.

The same dynamic is at play in Banco Santander’s recent attempt to hire Andrea Orcel. In a different political environment, Santander might have got away with its hastiness in naming Orcel chief executive, despite the need to take on €50 million in deferred pay from UBS.

Not so now: Orcel goes against the spirit of the times, however much Santander might need a charismatic outsider to boost its capital and grasp important strategic decisions. UniCredit’s chief executive Jean Pierre Mustier did just that at UniCredit – but while Orcel’s hiring collapsed over his rewards from UBS, Mustier has embraced austerity and voluntarily cut his own pay.

Accusations of anti-money laundering failures are sweeping across Scandinavia and Europe from Danske Bank’s Estonian branch, with Deutsche Bank’s shares one of the most affected. This will serve to reinforce the sense that banks can’t be trusted, and that governments should reassert control. The German government’s 15% stake in Commerzbank will translate into even greater sway over the country’s biggest bank and the continent’s biggest investment bank.

The eurozone’s public authorities, though initially slower than their Anglo-Saxon peers to react to the 2008 crisis, have prolonged their banks’ agony by trapping the sector in never-ending capital hikes. This is partly an attempt to seal up the still-gaping cracks in the regulatory architecture of the eurozone itself.

Some banks’ more cautious dividend policies this year (notably Santander and Société Générale) might suggest the supervisor is not relaxing.

But bashing banks because they put shareholder returns above priorities that others might prefer them to have, is an easy win for politicians – particularly in continental Europe, with its lesser enthusiasm for capitalism compared to the US or even the UK.

This could make the appointment of a politician to the vice presidency of the ECB worrying, although it is hard to tell how ordinary Spaniards would judge Luis de Guindos’s support for more pressure on capital.

There is a pervasive view in some of Europe’s political class that retail banks should be like arms of the government, or client-owned. Much more than in the US, mutual banks – which do not prioritize returns – survive and thrive here, and their central bodies are close to central governments.

Banks owned by the regional governments are the most powerful pillar of the banking system in Germany. Attempts to reform a similar system in Italy are at the origin of much of that country’s banking woes this decade.

French banks, whose chief executives rarely budge from Paris, are already closer to the centre of their government’s orbit than in Germany. They have done a better job of aligning themselves with the state’s priorities, possibly above those of their shareholders – until reality hits. France’s nationalization of its banks in the 1980s was not to bail them out but rather for socialist ends, although today nationalism links them to the state more than socialism.

Fintech competition and cost cutting (instigated, partly, by regulatory policy) again make tolerance of high pay and high returns less likely. In Scandinavia, bank chief executives who wielded the axe insensitively have ended up getting ousted themselves. The very recent state-owned past of Nordea’s Swedish division has caused inevitable disappointment over its social role, too – perhaps adding impetus to the move of its headquarters from Stockholm to Helsinki.

Dutch banks are reputed for their efficiency, yet suffer popular hatred in their home market, making it even harder to ignore the pleas of politicians. This makes privatizing ABN Amro harder, not least when ING’s chief executive Ralph Hamers also had to back down over a pay increase last year because a parliamentary motion condemned it, even though ING repaid its state aid back in 2015.

For the big banks, neither mergers nor cost cuts are ways out of the regulatory compressor. Instead, as research from Kepler Cheuvreux points out, banks will be better able to shape their future if they embrace their stakeholders equally. “Being shareholder-friendly will necessitate not maximizing shareholder value,” the analysts say.

That sounds contradictory, and calling it renationalization might be going too far. But without question there are now greater consequences of skimping on compliance, financing coal or running on low capital.

Against that backdrop, no wonder banks market their capital ratios, and their abidance by social and environmental principles, with ever-greater vigour. But if they neither ask for nor expect any big improvement in profitability – nor any let-up in Europe’s loss of global banking share to the Americans – who knows what they might get?