GBPCAD on a Slippery Mode; Stays Positive in Medium Term 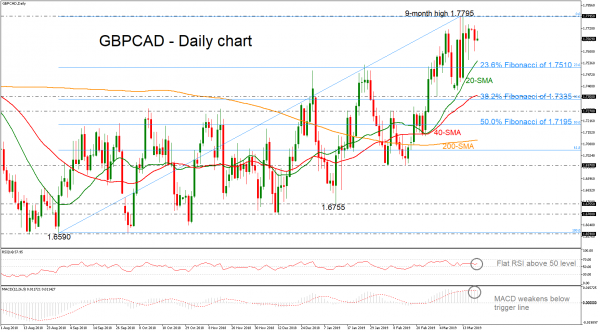 GBPCAD is losing momentum after finding a strong resistance obstacle around the nine-month high of 1.7795 in the preceding week. The technical indicators are slowing down, mirroring the market’s behavior over the last days as the RSI is flattening in positive territory. The MACD is also holding in the bullish area, however, it slipped below the trigger line, creating a bearish crossover.

In case the pair changes its short-term direction to the downside, the bears would probably challenge the 20-day simple moving average (SMA) currently around 1.7550 and then could hit the immediate support at the 23.6% Fibonacci retracement level of the upleg from 1.6590 to 1.7795, around 1.7510. A break lower, could last until the 40-day SMA and the 1.7350 support, which stands around the 38.2% Fibonacci.

Alternatively, additional increases may drive the price towards the nine-month high of 1.7795. Above the latter, the 1.7980 resistance, registered on April 2018 comes into view.

In the more medium-term picture, the slightly bullish correction shifted to a stronger positive tendency and is likely to remain favorable as long as prices remain well above the short-term SMAs.