Markets Remain Choppy ahead of Fed 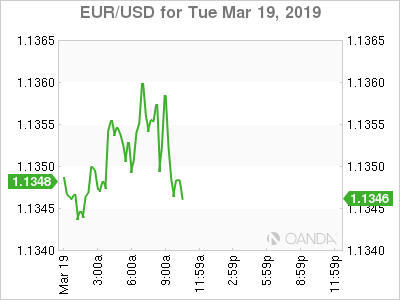 Tight trading conditions persist as the FOMC begins their two-day meeting.  Volatility is falling sharply as currencies await the Fed’s assessment of the economy and the update of their dot plot forecasts.

The US dollar remains under pressure as expectations remain high that the Fed will maintain the dovish stance they poorly delivered in January.  The market expects the Fed to downgrade their 2019 rate hike forecast from two to one.  Economic forecasts are also expected to come down.

Price action across all asset classes have firmly priced in Fed dovishness to remain in place over the rest of year and many expect the next move to be a rate cut.  Powell is going to want avoid any flipflops and exercise caution on being to quick to react if we get a string of better than expected economic prints.  The risks for a hawkish surprise is growing as the markets seem fixed on the Fed remaining dovish and overly confident the Fed will avoid any optimism shifts on improving data.

If the Fed the remains on course and the outlook for the economy is strong enough to warrant no cuts in the immediate future, we could see emerging market currencies have their day in the sun.

House of Commons Speaker Bercow decision to prevent PM May from delivering a slightly tweaked Brexit plan gave PM May added ammunition for her to go back to EU to seek concessions.  The EU is expected to offer a conditional Brexit extension that will give May what might be her last attempt of getting a meaningful vote done.

Cable remains supported as no-deal Brexit risks have been alleviated and the data remains strong for the UK economy.  The UK jobless rate fell to a 44-monthy low and wage growth remains strong as the January reading came in at 3.4% and the prior month was revised higher to 3.5%, the highest reading since mid-2008.

The BOE remains the only major central bank that is expected to deliver a rate hike as their next move.  If May can pull off an upset and deliver a short extension along with a Brexit deal, the British pound could see much more upside.

US stocks remain bid as the Fed begins their two-day policy meeting.  Wall Street widely expects Powell to deliver a cautious tone on the economy and possibly signal rate hikes are off the table for the foreseeable future.  Recent data remains mixed and the patient approach is likely to remain in place all throughout 2019.  Current expectations are for the Fed to downgrade their 2019 dot plot forecasts from two to one, but if we do see both hikes taken off the table, that would mean the Fed has a worse outlook on the economy and that could be negative for risk appetite in the long-term.

OPEC + has been successful in stabilizing prices as supply curbs took Brent crude over 25% higher, but that theme could be ending in the summer. Last year, the two de facto leaders of OPEC +, Saudi Arabia and Russia agreed oil needed to go higher.  But Russia would be happy with oil at current levels and would prefer to normalize their production in June versus trying to see further cuts try to drive oil prices higher.

The potential delay with the April meeting works in favor for the Russians. Expectations were high for cuts to be extended and now, OPEC + will monitor the sanctions on Venezuelan and Iranian crude, rising demand from warmer April weather, and how effective Saudi Arabia’s export squeeze is on US stockpiles.

Brent may have difficulty sustaining a significant move higher even it captures the $70 level.

Gold prices continue to rise as expectations remain high for the Fed to remain dovish.  Gold may be the best asset class that can benefit on a policy mistake by the Fed.  If the Fed maintains the possibility of tightening if conditions improve, we could see the initial move be dollar positive (initially negative for gold), but ultimately positive for gold as expectations will return for the Fed to invert yield curve sometime early next year.