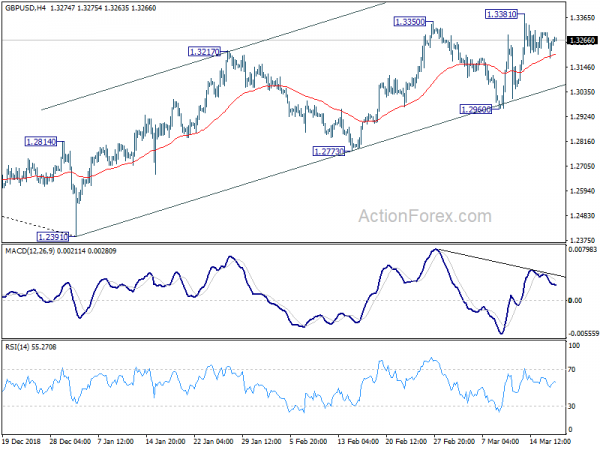 The financial markets are generally quiet in Asian session today, with stock indices stuck in tight range. Sterling turned mixed after knee-jerk reactions to new Brexit chaos overnight. The Pound is probably as clueless the UK government on what’s next for Brexit. Australian Dollar pares back some of this week’s gain as Q4 house price dropped more than expected. Overall, Aussie is the weakest one for now, followed by Dollar. Yen is the strongest, followed by Kiwi.

Technically, there isn’t any critical development yet. EUR/USD continues to lose upside momentum there is no indication of completion of rebound from 1.1176 yet. Yesterday’s rally resumption in oil prices provided no lift to Canadian Dollar. USD/CAD is stuck in tight range above 1.3289 even though more downside in in favor. AUD/USD, despite yesterday’s rebound, is held below 1.7121 minor resistance, thus maintains near term bearishness. Sterling remains non-committal, range-bound in GBP/USD, EUR/GBP and GBP/JPY.

Overnight, UK Commons Speaker John Bercow invoked a rule to forbid Prime Minister Theresa May to bring back the same Brexit deal for another meaningful vote, unless there are substantial changes in the proposition. The 415-year-old Parliamentary convention is for “sensible use of the House’s time and proper respect for the decisions that it takes”. Without being forewarned, the government just said: “We note the speaker’s statement. This is something that requires proper consideration”, without further elaboration.

Now, it’s near impossible for a Brexit deal to be passed this week and hence, Article 50 extensions won’t be a short one. The Sun newspaper reported that May is drafting a letter to European Council President Donald Tusk to request a delay of 9 to 12 months. Some suggested one way to bring back the Brexit deal for another vote is having EU granting another Brexit date than March 29, thus, making the proposition substantially different. Another way is to end the current parliamentary session early without dissolving it, and start a new session. The same deal could then be voted for in “another” session.

But then, the fundamental question is not solved. That is, is there enough votes to the current Brexit deal through?

Chief Economist for the ABS, Bruce Hockman said: “While property prices are falling in most capital cities, a tightening in credit supply and reduced demand from investors and owner occupiers have had a more pronounced effect on the larger property markets of Sydney and Melbourne.”

In the March meeting minutes, RBA noted the “tension” between ongoing improvement in job data and slowdown in output growth in H2 2018. Leading indicators pointed to further tightening in the job market and wages growth picked up in Q4. Growth slowed but business and public spending remained positive. However, there continued to be “considerable uncertainty” around consumption outlook, given fall in house prices.

Taken into account the available information, RBA judged that current monetary policy stance was “supporting jobs growth and a gradual lift in inflation”. But “significant uncertainties around the forecasts remained”. The scenarios of a rate hike and rate hike were “more evenly balanced” than over the preceding year. And, “it would be appropriate to hold the cash rate steady while new information became available that could help resolve the current tensions in the domestic economic data.”

New Zealand Westpac consumer confidence dropped to 103.8 in Q1, down from 109.1. UK job data will be a major focus in European session, together with German ZEW economic sentiment. Swiss will also release trade balance. Later in the day, US factory orders will be featured.