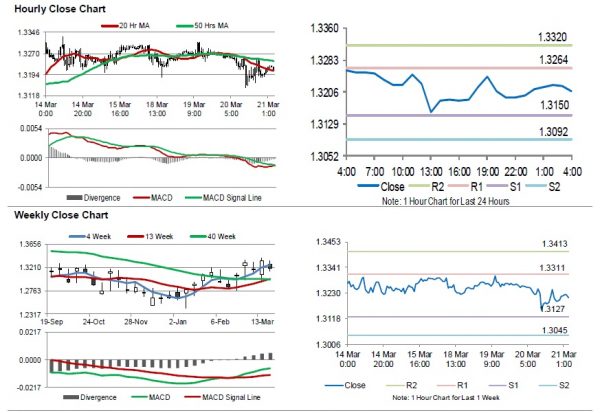 For the 24 hours to 23:00 GMT, the GBP declined 0.52% against the USD and closed at 1.3199, after British Prime Minister Theresa May confirmed that she was seeking a three-month delay the Brexit deadline.

In economic news, UK’s consumer price index (CPI) advanced 1.9% on a yearly basis in February, more than market consensus for a rise of 1.8%. In the previous month, the CPI had recorded a gain of 1.8%. Meanwhile, Britain’s retail price index growth slowed to a 6-year low level of 2.5% on an annual basis in February, at par market expectations. In the prior month, the index had registered a similar rise. Also, the nation’s house price index climbed 1.7% on an annual basis in February, less than market anticipation for a rise of 2.4%. The index had registered a revised advance of 2.2% in the prior month.

Going ahead, investors would await the Bank of England’s interest rate decision followed by UK’s public sector net borrowing and retail sales data, both for February, set to release in a few hours.