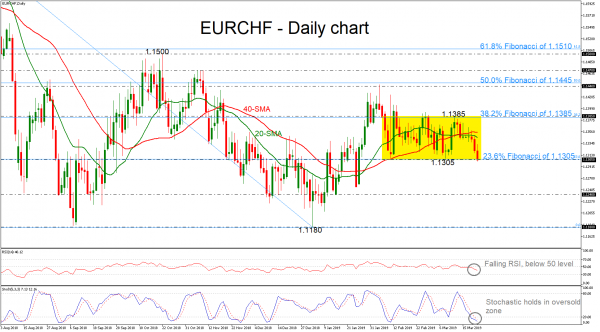 EURCHF has been trading in a relatively narrow range between 1.1385 and 1.1305 from late January onwards, while the past few days the market action has stretched further below the 20- and 40-day simple moving averages (SMAs). Momentum oscillators are losing ground, with the RSI falling below its neutral 50 level and the stochastic dropping into the oversold zone.

Potential declines beneath the 1.1305 level could meet support near the 1.1240 low, identified on January 15. If the bears violate that area, that would turn the bias to cautiously negative, opening the door for a test of 1.1180 – the January 3 low.

In the medium-term picture, the market is also neutral, with the price action taking place within a wider range of 1.1180 -1.1500 since August.

Concluding, a violation of 1.1445 could signal more advances, while a move below 1.1305 may be the trigger for more declines.