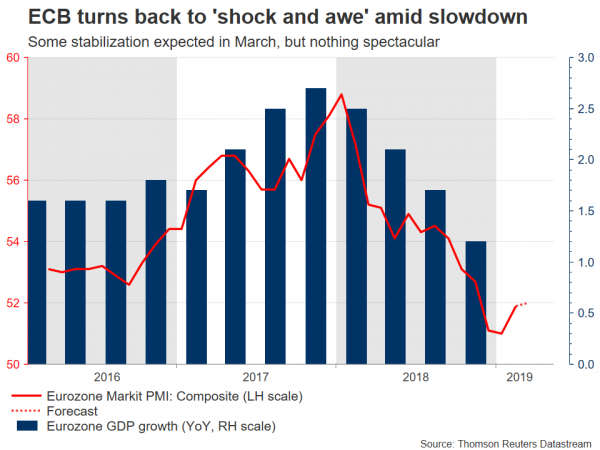 The Eurozone will be on the receiving end of preliminary PMIs for March on Friday, at 09:00 GMT. Economic growth has slowed drastically lately, leading the ECB to redeploy its ‘shock and awe’ tactics, and push back the timing of its first planned rate increase. Against this backdrop, these data could prove crucial for the euro, as they will provide an early glimpse of how the bloc’s economy ended Q1.

The euro area lost considerable momentum in recent quarters, with yearly GDP growth slowing from a peak of 2.7% in Q4 2017, to an anemic 1.1% in Q4 2018. Much of this weakness emanates from the traditional ‘engine’ of European growth, Germany, though other key economies like France and Italy aren’t faring much better. In particular, the manufacturing sector has been at the epicenter of the softness, as a slowdown in global growth combined with the threat of US tariffs on European cars are clouding the outlook for exports.

After a long period of considering this deceleration ‘temporary’, the European Central Bank (ECB) finally came to terms with reality at its latest meeting in early March. Policymakers decided to shock markets by taking action over and above what was expected, namely by pushing back the timing of their first planned rate increase, effectively loosening financial conditions in an effort to stimulate the economy.

Against this backdrop, the upcoming PMIs could be crucial in shaping expectations around future ECB policy and by extent, for the euro’s direction. Mainly because they are released ahead of official data, and therefore provide an early snapshot of economic performance. In March, the manufacturing index is expected to rise to 49.5, from 49.3 previously – though that would still leave the print in contractionary territory below 50. Meanwhile, the services PMI is forecast to tick down to 52.7 from 52.8 earlier. Hence, the composite index that blends the two measures is seen rising marginally to 52.0, from 51.9 in February.

If the actual prints meet expectations, that would indicate some stabilization in economic activity, which could be seen as a soft signal that a rebound may lie ahead. On the margin that could prove positive for the euro, though admittedly, for the single currency to truly make a substantial break higher, traders would probably need to see a much more significant rebound in these figures.

The French and German prints will be released ahead of the euro area-wide data, specifically at 08:00 GMT and 08:30 GMT respectively – any market reaction could begin with them.

Technically, potential resistance to advances in euro/dollar may be found near 1.1450, the area that capped that rally on March 20, with an upside break opening the door for 1.1515. On the flipside, declines in the pair – perhaps on a disappointing set of PMIs – could stall initially around the 1.1340 territory, where both the 50- and 100-day simple moving averages (SMAs) are roughly located as well.

As a final note, any developments in the ever-evolving Brexit saga could also impact the euro, given the bloc’s exposure to the damaging effects of a potential no-deal outcome. Of course, to a lesser extent than the pound itself.