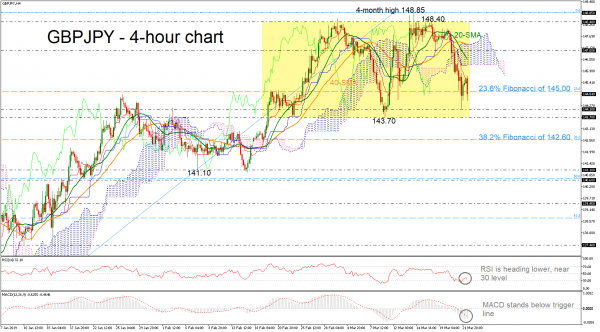 GBPJPY had another bearish start on Friday, with the price breaking the crucial 23.6% Fibonacci retracement level of the upleg from 132.48 to 148.85, around 145.00. The technical indicators in the 4-hour chart are endorsing this view, with the RSI reversing back down to its 30 oversold mark and the MACD keep stretching in negative area and below its trigger line. Also, the price is trading well below the Ichimoku cloud and particularly below the red-Tenkan sen line, suggesting more losses ahead.

More southward movement could meet the 144.10 support area, taken from the latest low. A failure to hold above this level, could open the way towards the 143.70 area which if broken could trigger a more aggressive sell-off towards the 38.2% Fibonacci of 142.60.

In the positive scenario, an improvement has the potential to retest the blue Kijun-sen line and the lower band of the Ichimoku cloud near 146.25, while slightly above this hurdle the 20-simple moving average (SMA) currently at 146.53, could be also in focus. Further up, the 147.00 handle and the 40-SMA around 147.20 could halt upside movements as well.

Summarizing, looking over the market’s last one-month performance, the pair has been neutral within the 148.40 resistance and the 143.70 support levels, while in the bigger picture, GBPJPY remains bullish.