The Weekly Bottom Line: When The Dots Are Down 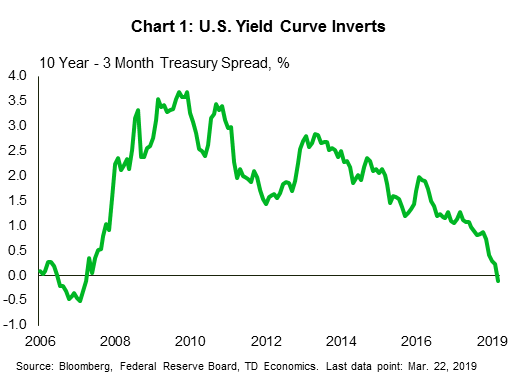 The Fed’s revelation that it only expects to hike rates once by the end of 2020 fanned equity market flames through much of the week. However, a souring in March PMI surveys for Japan and Europe, dampening expectations of a modest rebound in these regions in 19Q2, snuffed out some of that optimism. Global treasury yields moved down sharply, causing the U.S. yield curve to invert slightly today (Chart 1). A yield curve inversion has historically preceded a recession by up to eight quarters.

The Fed meeting was the first opportunity for it to present updated economic projections since they pivoted to a patient stance in January. In the statement, FOMC officials downgraded their assessment of current economic conditions. Moreover, the committee reaffirmed that it “will be patient as it determines what future adjustments to the target range may be appropriate”, which is unchanged from the January statement.

Markets were waiting for the Fed’s dot plot downgrade, and it didn’t disappoint. The majority of FOMC members (11 of 17) do not expect to raise rates in 2019, down from a median expectation of two hikes in December (Chart 2). For 2020, the median expectation is one hike. The longer-run expected level of the fed funds rate is 2.8%, which is unchanged from December.

These lower rate expectations came alongside a modest downgrade to real GDP growth to 2.1% in 2019 (prev. 2.3%), and 1.9% in 2020 (prev. 2.0%). The unemployment rate forecast was raised two-tenths in 2019 and 2020, and one tenth in 2021. Inflation expectations, however, were unchanged, suggesting that the Fed’s expected monetary policy path should keep inflation on target.

Given a muted inflation backdrop, deteriorating economic outlook and uncertainty about the path of Brexit, an extended pause on hikes continues to be a prudent course of action and remains in line with our recent forecast.

Adding to Europe’s economic woes is the extended period of Brexit uncertainty. The EU agreed to extend the Brexit cliffhanger until April 12th if the UK’s parliament votes against the withdrawal agreement for the third time next week. That gives Theresa May three weeks to sell her negotiated Brexit deal to parliament. If the withdrawal agreement is eventually passed, it will have until May 22nd to sort out the logistics for withdrawal.

The upside of a shorter extension than May had requested is it should reduce the duration of Brexit-related uncertainty, which is exacting a toll largely on UK economic activity, but also weighing on European sentiment. Our UK economic forecast was downgraded last week to a 1.2% pace in 2019, versus 1.6% in our December outlook. In its decision to leave rates on hold this week, the Bank of England continued to fret about Brexit developments. With Brexit developments in flux and weak foreign demand, we expect the BoE may remain on the sidelines through 2019.

It was a busy week for Canadian data and financial markets. The S&P/TSX lost ground this week as oil prices gave up earlier gains in light of Friday’s manufacturing data that signalled a deteriorating global economic outlook. Meanwhile, the budget-heavy week was joined by data that did little to change the downbeat domestic economic story.

The big-ticket event was the Federal Government’s release of its FY2019-20 budget on Tuesday. The government’s projected deficits for last year were lower than initial estimates, with the windfall used to finance new initiatives. Some of the measures include a focus on incentivizing education and job training, with new refundable tax credits and EI support, and reduced interest costs on Canada Student Loans. Other areas of focus included environmental initiatives, where the government is introducing a credit for electric vehicles and transferring $1 billion to municipalities for greening initiatives.

Arguably, the most attention-grabbing parts were its housing demand measures. Specifically, its First Time Home Buyer’s Initiative includes a shared equity mortgage program and an increase in RRSP withdrawal limits. This may help increase home ownership rates, but the impact on sales and prices is likely to be minor. Indeed, we anticipate both to be only around 3% higher by the end of 2020 if implemented. Still, not all markets are expected to benefit, with some like Toronto and Vancouver likely not benefitting as much due to the price cap, and with tight markets potentially experiencing higher price impacts.

On the revenue side, the budget contained little change, with the most notable being a cap on the value of stock options subject to tax-preferred treatment. All told, the new budget’s measures are unlikely to have material implications on growth or monetary policy projections. Importantly, the deficit trajectory (Chart 1) is mostly unchanged.

Meanwhile, three provincial governments showcased a commitment to balanced budgets this week. New Brunswick’s decent starting point and planned spending restraint should help keep its books in the black within the projection horizon. Saskatchewan’s government also signaled a commitment to surpluses going forward, an encouraging feat given its outsized deficits following the 2014 oil price shock. Last but not least, Quebec’s new government tabled its first budget, introducing an array of new measures, with an intention to maintain surpluses of $2.5-$4 billion.

Budgets aside, two top-tier data releases capped the week. The CPI inflation print was unsurprising; with the headline coming in at 1.5% and the Bank of Canada’s core measures hovering slightly below its target, at an average of 1.8% (Chart 2). Retail sales disappointed for the third straight month, declining 0.3% and with volumes almost flat, consistent with expectations of a slowdown in consumer spending in Q1. Wholesale trade was decent, with a 0.6% uptick. Altogether, the data reinforce the expectation that the Bank of Canada will likely remain on the sidelines for a long period to come.