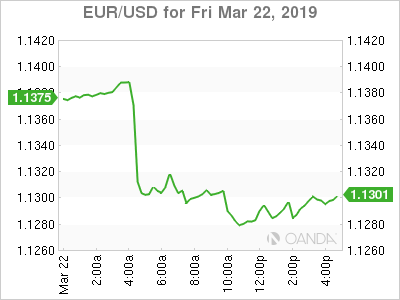 The US dollar had a wild week, finishing the week mixed against its major trading partners, as market participants reassess the effects of the Fed’s dovish commitment and how much weaker the German economy will become.  Risk-aversion remains the key theme for financial markets after the three-month/10-year yield curve inverted for the first time since the financial crisis.  The trade war and Brexit took a backseat this week, but a key trade meeting in Beijing and votes in Parliament will deliver crucial updates to the next respective steps.  All eyes will also be on the Attorney General as he will be concluding his review of the Mueller Report.

The euro collapsed after German PMI data contracted for a third consecutive month, making many economists who expected Germany to stabilize scratch their heads.  As the German manufacturing sector falls further into contraction territory, many are pricing in much lower growth for the largest economy in the euro zone.

The ECB is not going to be raising rates anytime soon and recessionary concerns could start to raise expectations of further stimulus from the Bank.  Euro weakness is now also approaching some longer-term technical levels at 1.12 and if that breaks, deeper support could come from the psychological 1.10 handle.

The precious metal had two main catalysts for bullishness this week.  The Fed’s decision to wipe out all rate hike increases for 2019 and their downgrade of their growth outlook signaled to investors that the Fed is very concerned about the economy.  The other key catalyst was the slower global growth concerns that stemmed from the weaker than expected PMI data from Europe.

In the short-term, it appears there are not many economic releases or triggers that will alleviate weakening economic growth concerns.  Trade deal optimism has derailed many of golds rallies in recent months, but we may see markets be less optimistic until we see a meeting on the books for President Trump and Xi.

Oil prices are under pressure as global growth concerns spark fears that demand might be softer than expected. The fundamental case for higher prices still remains valid, but if we continue to see further deterioration in Europe and Asia, we could see production cuts matter less.  Rising production from the US is expected to make fresh record highs and ultimately be a headwind for higher crude prices.

Another critical week for PM May is upon us.  This could be her last stand as she tries to push through her unpopular Brexit deal through Parliament.  The March 29th Brexit deadline has been pushed back to April 12th.  The pressure is on for May to try to deliver a Brexit deal or we may see a long extension.

The British pound remains vulnerable to a no-deal Brexit, but many scenarios still remain in play, but we could get further clarity after UK Parliament votes on many amendments.  Control of Brexit, leadership challenges and referendums are all in play next week.