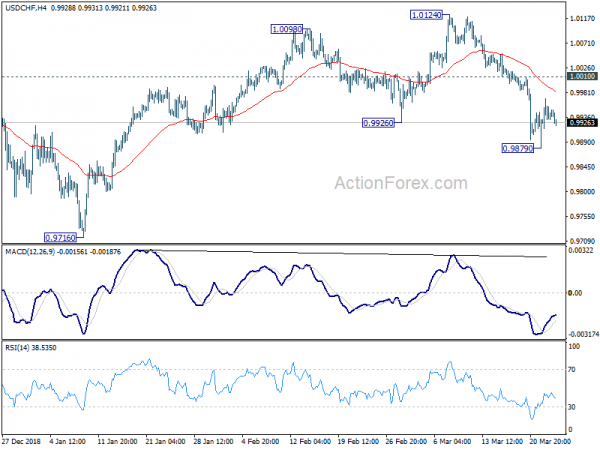 UK Prime Minister Theresa May just completed her Cabinet meeting without any comments to the press. The discussions there were reported to be positive but inconclusive. It’s now uncertain whether indicative vote on Brexit will be tabled today, or will be pushed after another meaningful vote on Tuesday. Meanwhile, there seems to be a tacit understanding that for some Brexiteers, May’s future is linked to the MV3.

In a statement released today, EU said it completes the preparations for no-deal Brexit on April 12. It also noted that it is “increasingly likely” that UK will leave EU without a deal. EU also urged all EU citizens and businesses to continue informing themselves about the consequences of a possible “no-deal” scenario and to complete their no-deal preparedness.

EU explained again that in a no-deal scenario, UK will “become a third country” without any transitionary arrangements. And this week “cause significant disruption for citizens and businesses”. In such case, relations between UK and EU will be government by general international public law, including rules of the World Trade Organization. Tariffs will immediately apply at the borders. And these controls could sauce significant delays at the border.

Ifo President Clemens Fuest noted “sentiment among German business leaders has improved somewhat”. And “companies are somewhat more satisfied with their current business situation, and they are decidedly more optimistic regarding business in the coming six months.” He added “the German economy is showing resilience.”

Fed Harker: Risks tilt very slightly to the downside, at most one hike this year

Philadelphia Fed President Patrick Harker said in a speech in London that “potential risks tilt very slightly to the downside” in the US. Though he emphasized the work “slight” as he saw “outlook as positive” and economy “continues to grow” and is on pace to the the longest economic expansion in history.

Harker added there was “continued strength” in the labor market. He’d “cautious against” getting caught up in a single data point in February’s dismal job data. Meanwhile, inflation is running around 2% target and “does not appear to be on a strong upward trajectory”. Rather inflation is “edging slightly downward”.

Combining all, Harker stays in “wait-and-see mode”. He expects “at most, on rate hike this year, and one in 2020”. But his stance will be “guided by data”.

Chicago Fed President Charles Evans said he now doesn’t expect a rate hike until second half of next year. Also he warned that “at the moment, the risks from the downside scenarios loom larger than those from the upside ones”. And, “if activity softens more than expected or if inflation and inflation expectations run too low, then policy may have to be left on hold — or perhaps even loosened — to provide the appropriate accommodation to obtain our objectives.”

On the other hand, “if growth runs close to its potential and inflation builds momentum, then some further rate increases may be appropriate over time to ensure that the economy settles in on its long-run sustainable growth path and that inflation runs symmetrically about our 2 percent target”. He added “in this scenario, the path for rates will depend crucially on any signals of an acceleration in core inflation.”

Though, he emphasized that US economy is still in good shape. He pointed to Fed’s forecasts of 1.75-2.0% GDP growth in 2019. Evans said “the lower end of this range is actually in line with my view of the economy’s long-run growth potential. So we’re not looking at a bad number.” Though, “:the economy won’t feel like it is doing very well compared with last year’s very strong performance.”

Former Fed Chair Janet Yellen said in a conference in Hong Kong that yield curve inversion doesn’t indicate recession in the US economy ahead. Rather, the development suggests that Fed might need to cut interest rate.

Simply, put she said “my own answer is no, I don’t see it as a signal of recession”. She explained, “in contrast to times past, there’s a tendency now for the yield curve to be very flat”. Thus, it’s now easier for it to invert.

On the other hand, Yellen said “it might signal that the Fed would at some point need to cut rates, but it certainly doesn’t signal that this is a set of developments that would necessarily cause a recession.”

BoJ Harada: Unemployment rate won’t be below 2.5% without QQE

BoJ board member Yutaka Harada hailed that the quantitative and qualitative easing (QQE) program boosted productivity and drove down unemployment rate. He said in a speech that “the biggest contribution QQE has made to Japan’s economy was to boost its productivity.” Also, “without QQE, Japan’s jobless rate would not have fallen below 2.5 percent”.

Harada is a persistent dissent in BoJ’s monetary policy decisions. He complained regularly that allowing the long-term yields to move upward and downward to some extent was too ambiguous as the guideline for market operations. Also, he urged to introduce forward guidance that would further clarify its relationship with the price stability target.

Released from Japan, all industry activity index dropped -0.2% mom in January, versus expectation of -0.4% mom.

In the bigger picture, focus is back on medium term trend line (now at 0.9846). Decisive break there will argue that whole rise from 0.9186 has completed. Further break of 0.9716 will confirm reversal and target next support level at 0.9541. Nevertheless, there is still a chance that price action from 1.0128 are forming a consolidative pattern with fall from 1.0124 as third leg. If this is the case, stronger support should be seen between 0.9716 and the trend line to contain downside.