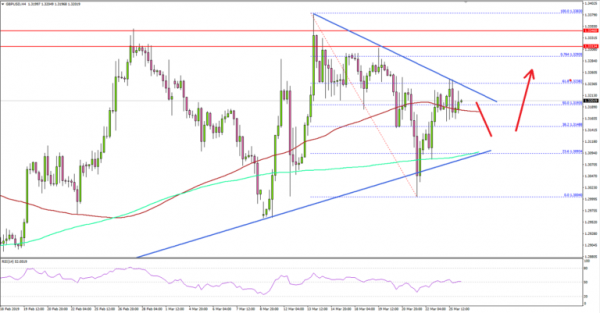 The British Pound started a solid upward move after buyers defended the 1.3000 support against the US Dollar. The GBP/USD pair traded above the 1.3140 resistance to move into a positive zone.

On the downside, an initial support is near the 1.3150 level. There is also a major bullish trend line in place with support at 1.3120, positioned along with the 200 simple moving average (4-hours, green).

Fundamentally, the Chicago Fed National Activity Index (CFNAI) for Feb 2019 was released by the Federal Reserve Bank of Chicago. The market was looking for a rise from the last reading of -0.43 to -0.30.

However, the actual result was mixed as the CFNAI came in at -0.29, down from the last revised reading of -0.43. The report added: