Sterling Range Bound after Parliament Took Control on Brexit, Votes on Alternatives Next 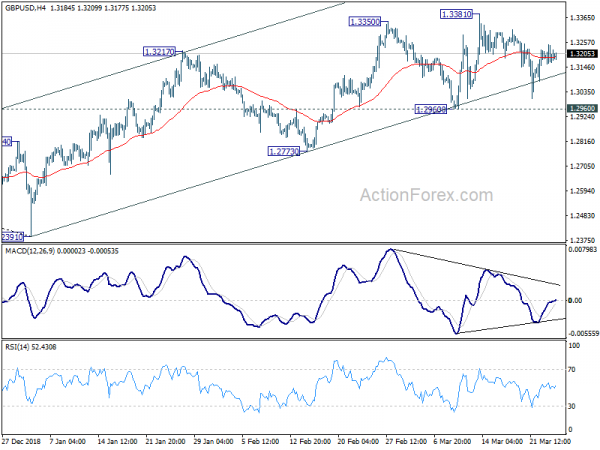 The forex markets are relatively mixed this week, in particular Sterling. Pound is staying inside familiar range even though the Parliament finally seized control over Brexit from the government. Focus will turn to Wednesday’s indicative votes but it’s uncertain whether the government will follow the results. Prime Minister May is still working on getting support for her Brexit deal and could make a come back this week. The eventual outcome remains far from certain.

Staying in the currency markets, Australian and Canadian Dollar are so far the strongest ones for today. But there is no sign of range breakout yet. Yen is the weakest one as risk sentiments stabilized, followed by New Zealand Dollar and Swiss Franc. Dollar is mixed despite extended decline in treasury yields. The markets could have probably listened to what former Fed Chair Janet Yellen said. That is, current yield curve inversion doesn’t necessarily suggest recession, but just Fed rate cut. Fed funds futures are pricing in more than 70% chance of a cut by December.

UK Parliament seized control over Brexit, to vote on alternatives on Wednesday

The UK Parliament seized control over Brexit from the government after passing a cross-party amendment by 329 to 302 late Monday. The amendment was tabled by former Tory minister Oliver Letwin involving Labour’s Hilary Benn. It gives MPs a series of votes on alternatives to Prime Minister Theresa May’s Brexit deal, including a second referendum, staying the the customs union, no-deal and even revoking article 50.

Three Conservative ministers resigned from the government to support the amendment, including Foreign Affairs Minister Alistair Burt, Health Minister Steve Brine and Business Minister Richard Harrington. A total of 29 Conservatives rebelled to vote for the amendment.

The Brexit department issued a quick email statement after the vote. It criticized that the results “upends the balance between our democratic institutions and sets a dangerous, unpredictable precedent for the future.” And it warned that “while it is now up to parliament to set out next steps in respect of this amendment, the government will continue to call for realism – any options considered must be deliverable in negotiations with the EU.

Earlier in the day before the vote, May declined to commit to abide by the outcome of the indicative votes. She said: “No government could give a blank cheque to commit to an outcome without knowing what it is. So I cannot commit the government to delivering the outcome of any votes held by this house. But I do commit to engaging constructively with this process.”