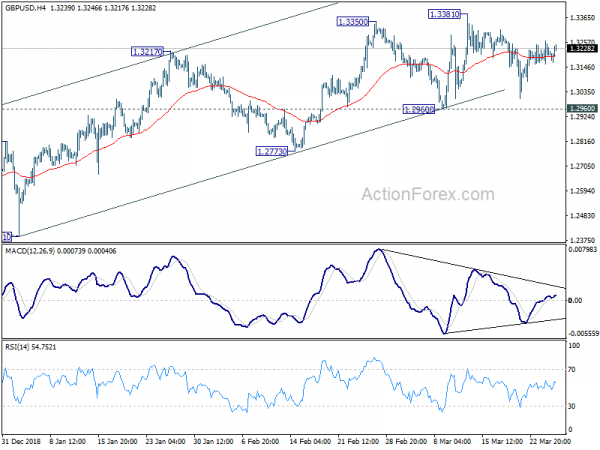 Indicative votes on Brexit alternatives in the UK House of Commons will catch most attention ahead. Debate is due to start by 1500GMT. We’ll see what alternative Brexit path could gain majority in the Parliament. House of Commons Speaker John Bercow will select which of the proposals will be put to a vote.  The options now include “respect the referendum result”, “customs union”, “confirmatory public vote”, “revocation to avoid no deal” and “no deal”.

Ahead of that, Sterling is trading as the strongest one for today so far. But it should be emphasized that Pound is stuck in recently established range against Dollar, Euro and Yen. There is no sign of breakout and current rise is nothing more than part of consolidations. Yen is following as the second strongest with help from weakness in global treasury yields. In particular, US 10-year yield is extending recent decline to as low as 2.379 so far, losing 2.4% handle. Yield curve inversion is just getting worse and worse.

Meanwhile, New Zealand and Australian Dollar remain the weakest ones undoubtedly. NZD is sold off sharply after RBNZ indicated that next move is a cut. AUD follows as RBNZ’s dovish shift somewhat solidifies that case for RBA cuts too.

Tusk said the voices of British people whole wanted to stay in the EU shouldn’t be ignored. And he urged the Parliament to be open to a longer Article 50 extension. He said, “I said that we should be open to a long extension if the UK wishes to rethink its Brexit strategy, which would of course mean the UK’s participation in the European parliament elections. And then there were voices saying that this would be harmful or inconvenient to some of you…. Let me be clear: such thinking is unacceptable. You cannot betray the 6 million people who signed the petition to revoke article 50, the 1 million people who marched for a people’s vote, or the increasing majority of people who want to remain in the European Union.”

Juncker said it’s unclear how Brexit would unfold. And, “I told some of you that if you compare Great Britain to a sphinx then the sphinx would seem to me an open book. We will see in the course of this week how this book will speak,”

Also, chief Brexit negotiator told lawmakers: “In all scenarios, the Good Friday agreement will continue to apply. The United Kingdom will remain a core guarantor of that agreement and is expected to uphold it in spirit and in letter:” And, “the Commission is ready to make additional resources available to Ireland, technical and financial to