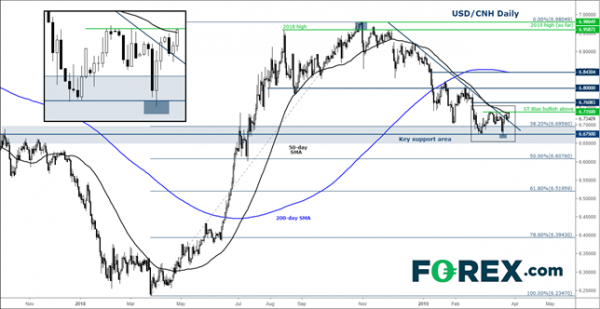 Last week, we wrote about the Indian Rupee which had created a potential topping pattern as the USD/INR dropped to test a key technical support area. While the USD/INR hasn’t been in a rush to bounce away from this area, the bulls are still defending their ground here nonetheless. So, we could still see a potential rally in the USD/INR. In fact, this emerging market currency pair is not the only one which is displaying a potential reversal pattern. The more closely-followed USD/CNH is also bouncing back from its own key support area around 6.6750, an area which had been significant resistance in the past. So, there is a potential we could see renewed selling in the Chinese yuan as well as the Indian rupee. If so, this could re-ignite EM currency crisis fears, potentially leading to a wider market sell-off, especially given ongoing recession concerns with investors rushing into the safety of government debt. As far the USD/CNH is concerned, a clean break above the old high near 6.7350 could potentially trigger technical buying and lead to a rally.