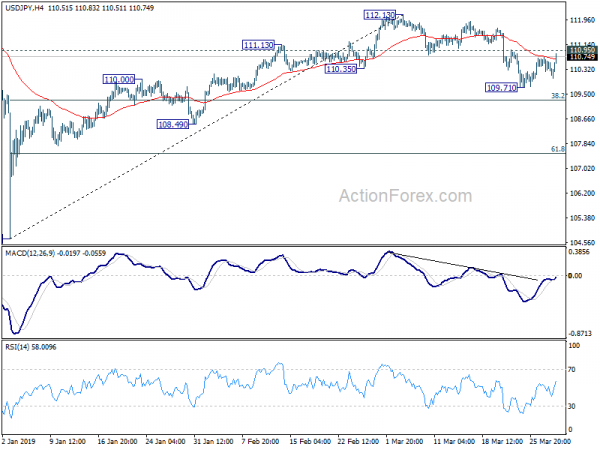 Dollar rises broadly in early US session with help from rebound in treasury yields. 10-year yield is now trying to regain 2.4 handle. Poor Q4 GDP is ignored while traders could be hopeful on some progress in US-China trade talks in Beijing. The development drags down the Japanese to one of the weakest.

Nevertheless, Sterling is the worst performing one on Brexit impasse. There will be another debate in the parliament tomorrow. But there is no sign of finally approving the deal to push the Brexit date from April 12 to May 22. Euro is also among the weakest after poor Eurozone sentiments indicators and Germany CPI miss.

Technically, with today’s decline, EUR/USD is heading to 1.1176 key support and break will resume medium term down trend. USD/JPY’s rebound now turn focus to 110.95 minor resistance and bring will bring stronger rise back to 112.13 resistance. EUR/JPY breached 123.82 temporary low but there is no follow through selling yet. Though, more downside is mildly in favor in EUR/JPY.

US Mnuchin look forward to productive meetings in China

Citing unnamed officials, Reuters reported that China’s proposals went further than in the past, which created hope for an eventual trade deal. The discussions on forced technology transfer covered areas that were not touched before, in terms of both scope and specifics.

Meanwhile, the texts of agreements moved forward in all areas even though they’re not where the US want to be. The areas are believed to include forced technology transfer and cyber theft, intellectual property rights, services, currency, agriculture and non-tariff barriers to trade.

Another official noted that some of the tariffs imposed since last year will stay even after a deal is made. And this will be an important issue to resolve, as an important part of the final deal. But for now, there is no clear timeline for completing the deal yet. And negotiations could drag on till June.

Chinese Premier Li Keqiang told business executives at the Boao forum that there is no trust deficit with the US and hoped that the trade talks could achieve results. Li also pledged that China must protect intellectual property or there is no hope for transformation in the country. He also sounded upbeat on the economy and said “changes” in March exceeded expectations.