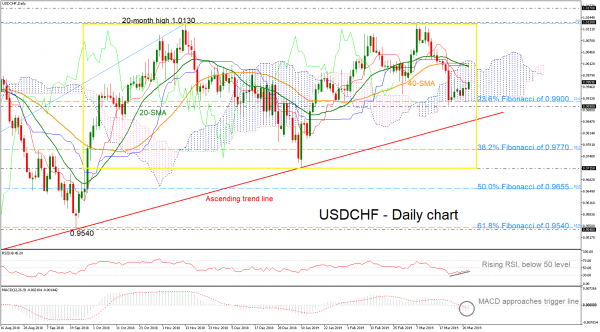 USDCHF is advancing after it found a strong rebound on the 23.6% Fibonacci retracement level of the upleg from 0.9185 to 1.0130 around the 0.9900 psychological level. Technically, the red Tenkan-sen line is pointing downwards, indicating a bearish retracement, however, the RSI is moving towards the neutral threshold of 50. Also, the MACD oscillator is moving slightly higher in the negative territory in the daily timeframe.

Immediate resistance is coming from the 20- and 40-simple moving averages (SMAs) currently around 1.0004, which are standing near the upper level of the Ichimoku cloud. A jump above these lines could shift traders’ eyes at the 20-month peak of 1.0130. A decisive close above this level could prove challenging for the bulls but doing so would shift the attention up to the next barrier of 1.0170.

Alternatively, a downside reversal would likely retest the 23.6% Fibonacci region of 0.9900 and the 0.9890 support level. A significant drop below this area could confirm another bearish rally until the long-term ascending trend line around 0.9850. More declines could send prices to challenge the 38.2% Fibonacci of 0.9770.

In brief, the long-term bias retains a bullish structure, while in the medium-term, USDCHF has been stuck in a range between 0.9715 and 1.0130.