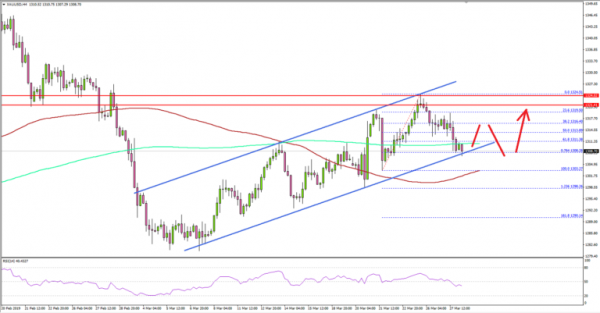 After trading towards the $1,282 level, gold price started a strong upward move against the US Dollar. The price traded above the $1,295 and $1,300 resistance levels to move into an uptrend.

There were multiple swing highs and lows, but the price followed a bullish path and traded above the $1,320 resistance. However, the price faced a strong hurdle near the $1,325 level, which was a support earlier.

However, there are many supports on the downside near the $1,305 level and the 200 simple moving average (green, 4-hours). Besides, there is a significant ascending channel formed with support at $1,308 on the 4-hours chart of XAU/USD.

If there is a break and close below the channel support, the price could extend losses towards the $1,303 swing low and the 100 simple moving average (red, 4-hours). On the flip side, a convincing break above the $1,325 resistance will most likely set the pace for more gains towards the $1,330 and $1,334 levels.

Fundamentally, the US Trade Balance report for Jan 2019 was released by the Bureau of Economic Analysis and the U.S. Census Bureau. The market was looking for a trade deficit of around $-57.0B.

Though, the result was better than the forecast as there was a trade deficit of $-51.1B, improved from the last revised reading of $-59.9B. The report added that:

Overall, gold price remains supported for more gains as long as it stays above $1,303. Looking at major pairs, EUR/USD declined heavily recently below 1.1300 and GBP/USD seems to be consolidating below the 1.3280 resistance.