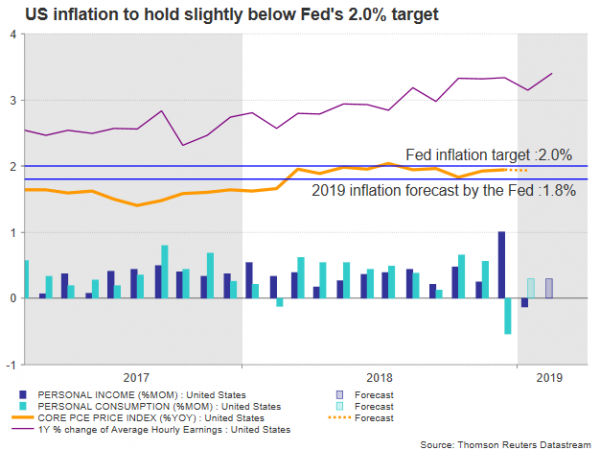 Fed chairman, Jerome Powell, said at his press conference following the March FOMC policy meeting that as long as inflation holds close to the target the central bank has room to remain “patient”. The core PCE price index delivered on Friday at 1230 GMT is expected to support Powel’s comments, while personal consumption and personal income readings published alongside price figures could restore some optimism for the US economy.

The core PCE index, the Fed’s most favorite inflation measure, is anticipated to remain unchanged at 0.2% month-on-month in January, leaving the yearly gauge steady at 1.9% and marginally below the central bank’s 2.0% inflation goal.


On the other hand, personal consumption which declined by 0.5% in December – the biggest pullback since 2009 – is forecast to return to normal levels and mark a growth of 0.3% m/m in January, while the value of income from all sources by consumers is also projected to rise by an equivalent familiar percentage in February after decelerating by 0.1% in the preceding month. Note that the collection of income data are more up-to-date than the consumption numbers which are still lagging by one month due to the latest government shutdown.

Despite wages advancing at the highest annual pace in almost a decade and the unemployment rate hovering around 18-year lows in March, the Fed decided surprisingly to leave its rate hike plans aside for the remainder of the year and downgrade its 2019 inflation forecasts from 1.9% y/y in December to 1.8% amid concerns that the economy could face more headwinds in the near future as negative risks abroad are heating up. Growth projections for 2019 were also revised lower from 2.3% y/y to 2.1%. Besides, with the effects from Trump’s tax cuts dissipating and consumer and business confidence measures slowing from their solid levels in 2018, the Fed has no reason to raise borrowing costs until the data suggest so.

Last Friday, the US 10-year treasury yield slipped below the 3-month bill for the first time since 2007 and has remained below it since then, unsettling Wall Street and the dollar over a possible recession as the phenomenon has preceded every economic downfall in the past 50 years. But unlike previous times, the 10-year yield did not bridge the 2-year note first, relieving markets that the signal may not be as reliable as it seems in the end. This week’s S&P/ Case-Shiller House price index, having already fallen ten months in a row, sparked worries as well after the figure deviated sharply below expectations in January, stretching its downtrend even further south.

Should Friday’s inflation data or/and personal consumption and income stats disappoint too, investors would view a potential rate cut as soon as this Autumn more seriously, pushing funds away from the dollar and towards safer assets. In this case, USDJPY could retest the 110 round level, while lower, the sell-off could turn more severe if the price violates support around 109.80. Yet, with the Eurozone struggling to recover economic and political momentum and the UK unable to find a common ground on the Brexit front, investors’ preference may be more skewed to the dollar than to the euro and the pound given the greenback’s safe-haven behavior as well.

Alternatively, better than expected readings could add legs to the dollar and lift it up to the 110.80 area. A breach of the 111-110.20 restrictive area, however, could prove more valuable to the market.