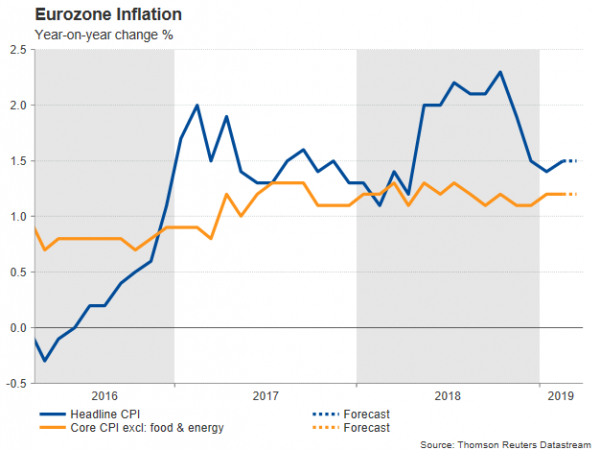 While the Brexit drama continues to keep investors busy in Europe, holding the euro and the pound in check, the Eurozone preliminary inflation readings for the month of March are expected to steal attention on Monday at 0900 GMT. Consensus is for the headline inflation to remain unchanged below the target the European Central Bank aims to achieve, feeding prospects of a continuing accommodative monetary policy as negative growth risks are on the rise.

On Thursday, the Harmonized version of the flash German Consumer Price Index, which is comparable to inflation measures from other EU economies, fell short of expectations both in monthly and year terms, raising speculation that Monday’s HICP for the euro area could also undershoot projections.

The European Central Bank has been long waiting wage growth to translate into higher inflation as it stubbornly maintained interest rates in negative territory and asset purchases running to enhance liquidity. While the headline CPI figure managed to increase slightly above the ECB’s 2.0% inflation goal during the second half of 2018, the core CPI that trims volatile food and energy items, remained subdued below 1.3% y/y, flagging that wage growth is still missing in action and therefore inflation upsides are not sustainable despite the unemployment rate easing to decade lows.

Indeed, during the December-January period, the headline CPI retreated significantly, from 1.9% y/y to 1.4% before inching up to 1.5% in February. On Monday, new data are anticipated to show that the measure failed to extend the recovery, remaining flat at 1.5%, which is also the ECB’s inflation forecast for 2019. Analysts also project a steady core CPI at 1.2% for the month of March.In monetary terms, such a level would urge policymakers to hold policy accommodative to aid the Eurozone economy. But since economic and political risks are heightening in the background mainly due to the Brexit chaos, the Italian recession and the US-Sino trade war, more needs to be done to avoid another crisis in the bloc.

With financial institutions complaining about negative interest rates eating their profits and the QE program coming to an end in December, the ECB has turned focus to lending. Specifically, at its March policy meeting, the central bank decided to provide further stimulus through a new series of targeted long-term refinancing operations (TILTRO-III) starting in September 2019 and ending in March 2021 (each with a maturity of 2 years). Moreover, the governing council agreed to continue reinvesting earnings from maturing securities purchased under the QE program for an extended period of time and until the date it starts to hike interest rates, or as long as it is necessary.

Stas on credit supply last month were also somewhat inflation-supportive as the numbers revealed that fears over a melting economy did not restrict the flow of cash to businesses and consumers. Corporate lending rose by 3.7% in February from 3.4% previously, while for households, the rate ticked up to 3.3% from 3.2% before. Still the negative prints in the eurozone consumer confidence measures and the weak PMI readings suggest that businesses and households are reluctant to boost spending.

The lack of demand in the EURUSD market reflects the rising confusion investors face about the region’s economic health. Worse-than-expected inflation readings next week could increase chances for an even dovish policy meeting on April 10th as markets could start pricing that the course of the accommodative program may turn to more stimulus if conditions deteriorate. Such data results could push the pair in the edge of the 1.12 area, while lower traders could look for support around the March 3 low of 1.1175 and then at 1.1130.

In the positive scenario, if inflation shows strength, EURUSD could climb above the 20-period moving average in the 4-hour chart (1.1249) and towards 1.13. Slightly higher 1.1330 could also halt upside corrections.

Install your trader software a