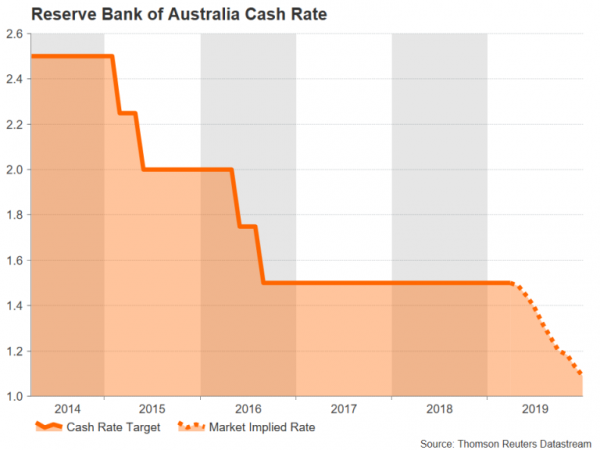 The Reserve Bank of Australia made a major shift in policy in February by signalling that a rate cut was just as likely as a rate hike, abandoning its long-held tightening bias. However, investors have gone a step further and are pricing a 25-basis point reduction in the cash rate by August. With recent economic data suggesting the RBA’s recently downgraded growth forecasts are already looking overoptimistic, the RBA will have a hard time maintaining its current neutral stance and could be tempted to join its New Zealand counterpart in making another dovish turn. The Bank is due to announce its latest policy decision on Tuesday at 03:30 GMT.

Australia’s central bank has held its cash rate at a record low 1.50% since August 2016 and has long been signalling that the next move is more likely to be up. But with growth in China – Australia’s biggest export market – continuing to decelerate and trade uncertainty still weighing on business confidence, Australia’s economy has also been losing momentum since the second half of 2018. Add to that, inflation remains subdued below the RBA’s 2-3% target band, forcing the Bank to repeatedly delay the timing of its rate hike.

But policymakers could soon be forced to backtrack on their rate hike plans and align their views with futures markets, which are currently indicating a more than 80% chance of two 25-basis point rate cuts by the year-end. It’s unclear, though, whether the central bank is ready to openly flag a rate cut as early as next week and may hang on to its neutral position for a while longer in case growth and inflation start to pick up in the coming months.

While a rebound in growth in the near term cannot be ruled out, it’s not looking very likely at the moment. The economy expanded by just 0.2% quarter-on-quarter in the final three months of 2018, retail spending weakened substantially in December and January, and inflation moderated to 1.8% in Q4. The labour market has been one of the few bright spots and the RBA is counting on rising employment to gradually lift wages, which in turn would put upward pressure on consumer prices.

But at the current pace, that could be a very slow process and the best hope for the RBA to meets its economic projections is for China and the US to resolve their trade differences quickly. A trade deal between the US and China would go a long way in boosting investor sentiment globally. Another tailwind for the Australian economy could come from a rebound in Chinese growth even without a trade agreement with the US. Chinese authorities have been pursuing a series of stimulus measures over the past nine months and should those policy steps begin to bear fruit, China’s major trading partners are also likely to benefit from any rebound.

As for the reaction in forex markets, the Australian dollar has already taken a bit of a knock from the Reserve Bank of New Zealand’s decision this week to adopt an easing bias. The move sent the kiwi spiralling downwards and the aussie followed suit, slipping back below the $0.71 level. However, given the RBA’s reluctance to go down the dovish path, keeping the aussie supported, there is plenty more downside scope for the currency should the Bank hint at a rate cut.

An upside move should not be discounted, however, as the RBA may stubbornly cling on to its relatively upbeat views. The bulls could drive aussie/dollar towards the 23.6% Fibonacci at 0.7165 in such a scenario. But a bigger rally is unlikely given that most investors think it’s only a matter of time before the RBA turns dovish and a strong upward push would probably be thwarted by the 200-period moving average, which currently lies slightly above the 0.72 handle in the 4-hour chart.