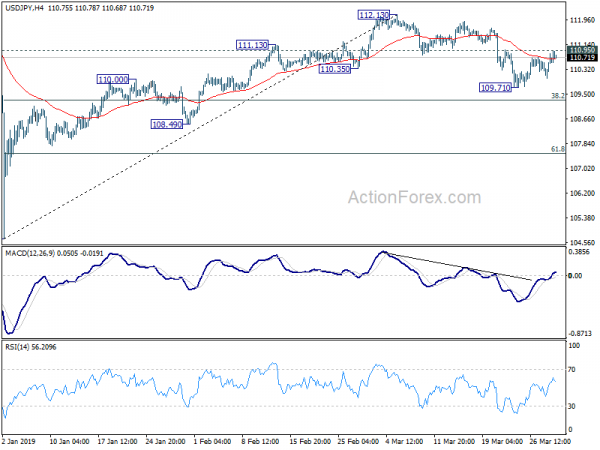 Yen is under some mild selling pressure today as China stocks lead Asian markets higher. While US 10-year yield failed to sustain above 2.4 handle overnight, it looks like recent decline has stabilized some what. And some more recovery in yield could be seen before quarter end. US-China trade negotiation is continuing in Beijing. But without specific news, it’s largely ignored. New Zealand Dollar is recovering broadly, but it’s just digesting this week’s decline. Sterling is also generally higher, as range trading continues. The deciding factor will be the Brexit vote in the Commons later today.

Technically, Dollar is one that’s worth watching today. With yesterday’s rebound. USD/JPY is now eyeing 110.95 minor resistance, break will indicate completion of the pullback from 112.13 and could bring stronger rise back to this resistance. EUR/USD is still on track to 1.1176 key support and break will resume medium term down trend. Break of 0.7056 minor support in AUD/USD and 1.3467 temporary top in USD/CAD could trigger upside acceleration against commodity currencies.

UK Commons to vote on Brexit Withdrawal Agreement again, without the part on future relationships

UK Prime Minister Theresa May will put her Brexit Withdrawal Agreement for meaningful vote in the Commons again today. However, this time, the part regarding future relationship with the EU is taken out. Hence, it’s technically no a repeat of the prior two meaningful votes.

Commons Speaker John Bercow confirmed that it’s a “new” motion from the government. And that complied with his no-repeat votes ruling. Meanwhile, according to the European Council statement, UK only needs to pass the Withdrawal Agreement by March 29 to get Article 50 extension to May 22. There was no mention of the Political Declaration on future relationship.

However, it remains highly uncertain whether there are enough votes to pass the Withdrawal Agreement. Back it January, the packaged was defeated by 432 to 202. After some additional assurances, it’s defeated 391 to 242 again.

US-China trade talks entered a full day meeting in Beijing today. Treasury Secretary Steven Mnuchin said as he left his hotel today that “we had a very productive working dinner last night, and we are looking forward to meeting today.” As in other similar occasions, there was no further elaboration. Meanwhile, Trade Representative Robert Lighthizer was quiet on the topic.

Back in the US, White House economic adviser Larry Kudlow said the trade negotiation is “not time-dependent” but “policy- and enforcement-dependent”. And it may take “if it takes a few more weeks, or if it takes months, so be it.” On the topic of lifting imposed tariffs in case of a deal, Kudlow said “we’re not going to give up our leverage”. Nevertheless, “It doesn’t necessarily mean that all of the tariffs would be kept in place. Some of the tariffs would be kept there.

New York Fed President John Williams said overnight that the “most likely case” was for US economy to grow 2%, with low unemployment. To him, the probability of recession this year or next was “not elevated relative to any year”. He also downplayed the significance of yield curve inversion. He added “there’s a lot of reasons to think that it has been a recession predictor for reasons in the past that kind of don’t apply today.” And, it only “telling us that growth will be pretty modest”.

On monetary policy, Williams said short-term interest rate is “around neutral”. Meanwhile, “any development in the economy, whether it’s on the employment side or on the inflation side, that moved in a persistent way away from our objectives, one way or the other, would be a reason to rethink the path of policy going forward.”

St. Louis Fed President James Bullard said overnight that the “spate of weaker data” is “probably mostly temporary”. And, the “notion of a rebound in the second quarter is a good forecast:. Meanwhile, it’s “premature to contemplate a rate cut here”. He added “you do want to watch the data closely”, and “you won’t really know that until you get to the July time frame.” To him, that would be the next time to revisit rate cut.

On yield curve inversion, Bullard said “you would have to get a wider variety of spreads to be inverted — the two-year/10-year in particular”. Also, he noted ” it would have to stay inverted and be meaningfully inverted for awhile, a matter