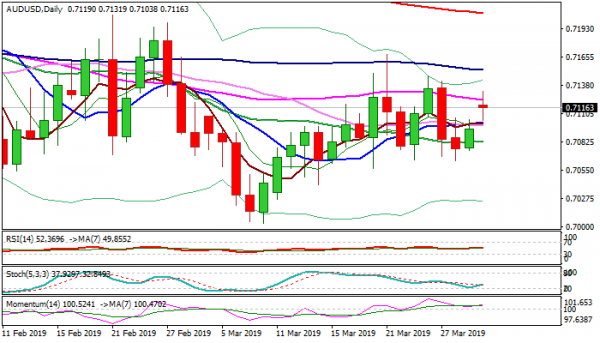 Recovery emerged from solid Fibo support at 0.7066 on Friday, where two-day fall bottomed.

Overall tone is still neutral as the price action remains within larger 0.7056/0.7168 range and daily MA’s are in mixed setup while momentum is flat.


Focus turns towards tomorrow’s RBA monetary policy meeting, outcome of which will be released in early hours of Asian session.

The central bank is expected to keep interest rate unchanged at 1.5% but the statement might give more hints about RBA’s next steps.

Traders suspect that surprise dovish turn by RBNZ last week may affect the outlook of Australian central bank and potential dovish turn would have negative impact on Aussie.

However, the central bank may not feel urgency in softening its tone as labor sector remains strong and improvement in property market has been noted.

Eventual break from recent congestion, limited by 20SMA at the downside and capped by 100SMA would provide clearer direction signal.